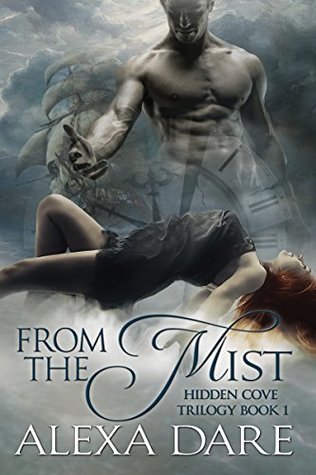 Reality cooking show host, Megan Forrester, braces for a film crew interruption of her long-awaited lighthouse tour vacation. While Megan cooks in a fake kitchen on a filming set, she misses out on heating up things in a real bedroom. As if only’s pile up like a stack of failed gluten-free recipes, she looks forward to a fun escape and getaway with her best friends from childhood and is no way prepared when fate intrudes.

When she steps into an unnatural fog in the present, she stumbles into the arms of a sexy pirate turned supply runner Everett Quinn in 1892. Everett sets out to waylay a man that threatens Everett’s livelihood. While Harbor Keep’s founder, Captain Zachariah Donovan, controls most of the town, he has no say against Everett and his former pirate mates. Destiny, on the other hand, holds sway.

Author Alexa Dare, with the oversight of the Jellicle Three (Jasmine, Lightning, and Stormy of feline persuasion), pens time travel and paranormal romance the way she likes to read them: sensual, adventurous, memorable. Along with spending time with her happily-ever-after alpha outdoorsman, Alexa cozies up at home—when not devoting her time to writing and bringing sexy romances to readers—with movies, popcorn, and triple chocolate cupcakes, not necessarily in that order.

My Disclaimer: I was provided a free ecopy of this book for subscribing to the author’s newsletter. I am providing an honest review for which I am receiving no compensation of any kind. All opinions are fully my own.

Time travel romance is tricky. It either works or it doesn’t. I’m not sure that this one does. So far, it’s all in the dark, literally. Everyone is stumbling around in the dark. It got really confusing keeping track of who was who in the dark.

We have the romance part. Megan and Everett are all set. They’ve fallen in love and gotten together in spite of Captain Donovan’s best efforts. And man, he’s one bad man. Actually, he’s evil, a real nasty character. I just hope he stays in the past and that he isn’t his own descendant or something like that. But I don’t think we’ve seen the last of him.

Both Jo and Abigail are missing in the fog, though whether they are in the present or past isn’t determined, yet. Isabelle, the Captain’s wife, is still missing in the past. I’m pretty sure Ursula had something to do with that. And does Ursula have something to do with the curse or whatever it is that Mrs. Carlisle is worried about? And who is Mrs. Carlisle? Is she someone from the past or a descendant?

There was no real HEA because Megan and Everett are still in the past with her entire life up-in-the-air and he’s barely hanging on. So, while I sat and read this book in one sitting and really enjoyed it, I’m not convinced it should get all those stars. There are just so many things unresolved. It’s too much like a prequel from that point. Abigail’s story is next in Of the Deep and then it’s Jo’s story in On the Edge. I do plan to read both of them because I liked the first book and want to know what happens. Check it out and see what you think.