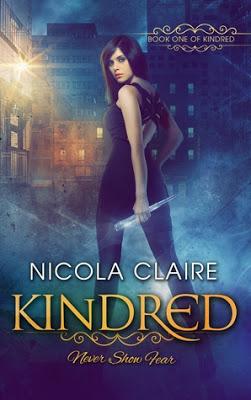 Other books in this series: Blood Life Seeker, Forbidden Drink, Giver of Light, Dancing Dragon, Shadow’s Light, Entwined with the Dark, Kiss of the Dragon, Dreaming of a Blood Red Christmas

“You may not be aware, ma douce, but not all vampyre have a kindred, some will live out their existence without such beauty in their lives. I have waited five hundred years for you.”

Vampires, shapeshifters, ghouls, and magic-users abound in a world where the Norms, (those humans without paranormal abilities), are ignorant of the creatures of the night and the supernatural species that live alongside them.

Lucinda Monk is a bank teller by day and a vampire hunter by night, but she wasn’t always a part of this world. Thrown into a heady mix of powerful people and sensual beings, she’s had to find her way practically blindfolded in amongst the creatures of the night.

Lucinda, though, is a capable and realistic kind of girl. Her motto: Never Show Fear.

But there’s something different about Luce. Something those creatures she hunts want. So, in order to stay one step ahead of the enemy, she has to let the enemy in. In all his compelling, seductive and delicious ways.

Sleeping with the enemy has never meant so much before. But can she trust him?

From the urban streets of the city to the dark alleys and sinful bars that promise a wickedness a girl from the farm has never before been exposed to, Lucinda gets drawn irreversibly into the dark side of life.

And if the Master of the City has his way, she will always be his. For eternity.

She has a passion for all things suspenseful, spiced up with a good dollop of romance, as long as they include strong characters – alpha males and capable females – and worlds which although make-believe is really quite believable in the end.

Creating rich stories with dynamic characters and unexpected twists that shock and awe has been pure bliss for this author. And just as well, because there’s a lot more story yet to tell…

You can get Nicola’s Starter Library – three popular full-length first-in-series romantic suspense novels, with hundreds of positive reviews between them – by signing up for her mailing list at www.nicolaclairebooks.com.

I was provided a free copy of this book by joining the author’s newsletter. I am voluntarily providing an honest review in which all opinions are fully my own. I am not being compensated in any way.

It’s been awhile since I’ve read a book just about vampires and vampire hunters, so this was a change of pace for me. It turned out to be a fun one, too. It’s not a new book, it’s been around since 2012. But it’s a prolific author’s series (10 books) with a related series, Mixed Blessings Mystery series.

The world and magic were well-done. It takes place in Aukland, New Zealand and Michel Durand is the Master of Aukland City. He was formerly in Paris. He came to New Zealand looking for someone special.

Lucinda Monk is that someone special. She’s an orphan raised by her aunt and uncle, so she doesn’t really know anything about her heritage as a vampire hunter. She has no training and no information. She has no connections other than a small group she’s found online. They really haven’t been very helpful.

But Lucinda is about to turn 25 years old and that’s a significant birthday for a hunter. She’s feeling some strange changes in herself and Michel is telling her things she almost can’t believe about her “coming into her power”. Suddenly, there’s another master vampire, Maximilian, trying to grab Lucinda and it’s turning into a war. Michel has his allies in Jock, Enrique, and Alessandra. Three more master vamps. Luce maneuvers him into an accord with the ghouls to help. And the Taniwhas, shapeshifters, add their support for Lucinda from an old alliance.

Sometimes it felt like Michel was totally on Lucinda’s side and being honest with her. At other times, it seemed like she really shouldn’t be trusting him at all. All the way to the end he seems to shift back and forth with his trustworthiness. He loves her. He gets a whole lot of power from her. He won’t abuse the power. He has plans for the power. I’m looking forward to the next book in the series to see how things go now that their power has expanded so much and they both have other allies.

If you like vampires, do check this one out. I recommend it!