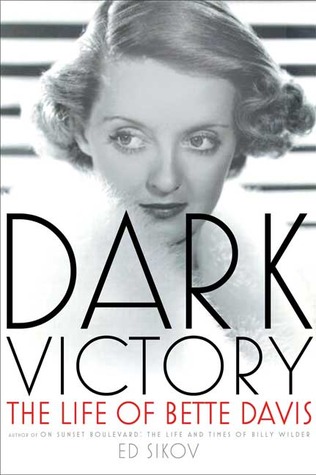 She was magnificent and exasperating in equal measure. Jack Warner called her “an explosive little broad with a sharp left.” Humphrey Bogart once remarked, “Unless you’re very big she can knock you down.” Bette Davis was a force of nature—an idiosyncratic talent who nevertheless defined the words “movie star” for more than half a century and who created an extraordinary body of work filled with unforgettable performances.

In Dark Victory, the noted film critic and biographer Ed Sikov paints the most detailed picture ever delivered of this intelligent, opinionated, and unusual woman who was—in the words of a close friend—”one of the major events of the twentieth century.” Drawing on new interviews with friends, directors, and admirers, as well as archival research and a fresh look at the films, this stylish, intimate biography reveals Davis’s personal as well as professional life in a way that is both revealing and sympathetic. With his wise and well-informed take on the production and accomplishments of such movie milestones as Jezebel, All About Eve, and Now, Voyager, as well as the turbulent life and complicated personality of the actress who made them, Sikov’s Dark Victory brings to life the two-time Academy Award–winning actress’s unmistakable screen style, and shows the reader how Davis’s art was her own dark victory.

I purchased this book at full price on Amazon. I am voluntarily providing an honest review in which all opinions are fully my own. I am not being compensated in any way.

I have always admired Bette Davis and her work. To me, she is the ultimate movie star, whether it be All About Eve or Death on the Nile. No matter who else is in the movie, she is the star.

I figured she would have been a difficult person to work with, and evidently, she was. She claims to have only argued for things that would make the film better. Never for more screen time for herself or such things. And there was no evidence to support such in any of what Mr. Sikov provided.

Mr. Sikov is gay and seems to jump on every possible mention of gay or lesbian behavior with a reference. I’m not sure they are all worth mentioning unless you happen to be focused on that community.

The book is broken into three sections. Sections one and two are done in brief accounts of her earliest years when she had to fight for everything she got and then the middle years once she had been recognized as the strong actress she was and had some control. This covered lots of name dropping, which was appropriate due to the nature of the business. It also covered brief accounts of the arguments and fighting that went on over each of her films.

Section Three is called Ongoing Conflicts and gets into the long term battles Ms. Davis had in Hollywood and her family issues. Her infamous difference with Joan Crawford was dealt with concisely and well, but there were plenty of other arguments and fights Ms. Davis got into. It seemed there were very few people she didn’t argue with, especially professionally. Unfortunately, her family life wasn’t much better. In fact, at times, it seems it was worse.

Bette’s father was a distant man and disappeared from the family’s lives early. Her mother, Ruthie, became a silhouette photographer to take care of Bette and her sister, Bobby. Once Bette started making money, her mother never worked again. Her sister had to be institutionalized numerous times for mental illness. Bette was married four times. She had several abortions due to conflicts with her filming schedules. She and her last husband adopted two children. One of them turned out to have mental illness and required institutionalization for her and others safety. She did have one child of her own at the age of 39, a girl she named B.D. (beady).

Sometimes this is all related in short accounts stuffed with information about each movie Ms. Davis was in, as in the first and second sections. Or, they were parts of gossipy chatty sessions in the third section. Several times I thought the book was at the end only to have the author pick up again with more of the details for a story I’d thought done.

I’ve never read other books about Ms. Davis, so I have nothing to compare it with. I have read other biographies, but not of quite such big stars, though Marilyn Monroe comes close. I was frustrated with the constant going back to stories. I think I would have preferred a more linear approach to her story. And I feel as if I needed a little black book to keep track of all the addresses for Ms. Davis. If you happen to read this, please let me know your thoughts about it.