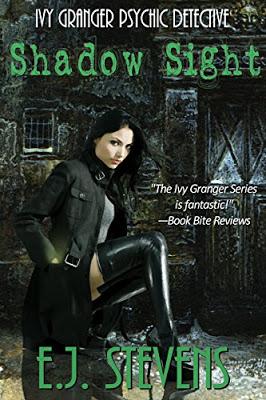 Welcome to Harborsmouth, where monsters walk the streets unseen by humans…except those with second sight, like Ivy Granger.

Some things are best left unseen.

Ivy Granger’s second sight is finally giving her life purpose. Ivy and her best friend Jinx may not be raking in the dough, but their psychic detective agency pays the bills–most of the time. Their only worry is the boredom of a slow day and the occasional crazy client–until a demon walks through their door.

A demon attorney representing the water fae? Stranger things have happened. And things are about to get very, very strange as a bloodthirsty nightmare hunts the city of Harborsmouth.

There’s blood in the water.

Kelpies have a reputation for eating humans. Unfortunately, kelpies are the clients. When an Unseelie faerie this evil stalks the waterways of your city, you have to make hard choices.

The lesser of two evils.

When E.J. isn’t at her writing desk, she enjoys dancing along seaside cliffs, singing in graveyards, and sleeping in faerie circles. E.J. currently resides in a magical forest on the coast of Maine where she finds daily inspiration for her writing.

Connect with E.J. on Twitter @EJStevensAuthor. For more, including a list of her books, freebies, and upcoming events visit http://www.EJStevensAuthor.com.

I’ve been looking forward to reading this book ever since I saw its cover. I’m a cover person and this one really appealed to me. I loved the choice of the old font for the title!

This was fast-paced, sometimes downright frantic! And that was so appropriate for this poor little town under attack! The world building and magic were really well done, too. Each species was introduced in turn along with its type of magic and its various allies and enemies, so it was relatively easy to keep track of who was who in this war they suddenly faced. Some of it was traditional stuff, some not.

The characters were okay, but there could have been a bit more development done on them. There just wasn’t a whole lot of time to get to know anyone in particular. And I was left with some questions, which I’m hoping will be answered in other books in the series. Like in book two! Why did Kaye redo the spell on Ivy? Who was she in the scheme of things?

There is lots of violence in this book since it’s about the town being attacked by a very blood-thirsty lot. But the only one getting any sex is the succubus, so forget about that. And everyone looks the other way since she does it as an act of war during the battle.

Now, Ceffyl Dwr, the King of the Kelpies was abducted and held captive and tortured for most of the time. His life was dependent on his people’s behavior, on their staying out of the fight, not helping the town. At one point, he makes a comment about Ivy’s father. I’d like to know how he knew her father, or who he was. There wasn’t very much time for Ceff and Ivy’s relationship to develop, so I do hope they get more time in the next book. I’m looking forward to seeing that relationship happen! They are so cute together. Check out this first book and see if you don’t have a new series to read!