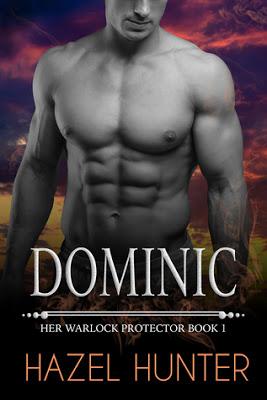 Timid but tough Sophia Chambers has finally found the perfect job for her strange ability. As a private detective’s assistant, she trails and photographs people with ease, because she can make herself unseen. But when she stumbles into the arms of Dominic Berrett, she finds she no longer wants to hide.

Though Dominic’s stunning looks could easily make him a model, he’s the farthest thing from it. As a warlock and captain in the Magus Corps, he’s been deployed to bring Sophia into a witchcraft fold that she doesn’t even know exists. Despite his five-hundred years as an immortal, he discovers something unexpectedly captivating in the beautiful but shy young woman.

But when her deadly past catches up to her and an ancient enemy of witchcraft emerges, their newfound passion strains to the breaking point. Though Dominic would do anything to keep her safe, he can’t protect someone he can’t see. Little does he know that her disappearance isn’t her own doing.

Hazel and her husband stopped being separate people years ago. They live their happy life in the always crowded, mostly sunny, and sometimes sweltering city of LA. Though they haven’t managed it yet, plans are afoot to add a kitty to the household, thereby giving the allergist fits.

Hazel has been writing full-time for several years, with some traditionally published work in other genres. But it’s her indie-published romance that fuels the creative fire. It turns out writing isn’t a job, it’s an obsession.

When you can pry Hazel’s fingers from the laptop, you’ll find her: on the elliptical watching a documentary, indulging her audiobook habit, or spending quality time with Candy Crush. Although she’s vegan, she’s a disaster in the kitchen. Luckily, potato chips and pinot noir come ready-made.

Dominic and Sophia did not make for a fun book to read. Their story was much too sad, both of them. Four years ago, a close friend of Sophia’s was killed in Phoenix. Since then she’s been hiding, using her ability to simply fade into the scenery, to become invisible. So working as a private investigator for Brent in his small private investigation company is perfect for her.

The Magus Corps has been trying to find her since the incident in Phoenix, tracking her with a crystal device that senses her magic when she uses it. Dominic is the one tracking her. The Magus Corps tries to gather up all witches as they awaken to protect them, sort of bringing them into the fold. Sophia doesn’t even know what she is. She has never been trained in the use of her power.

The Templars are also looking for Sophia. And it wasn’t too tough to figure out who their representative was. It was curious as to why he didn’t move to take her before the Magus Corps arrived on site though. Was he just waiting for the moment to do the most damage?

The sex was steaming hot. The violence was brief but rough. The storyline was good. This is the second one in this series that I’ve read and the writing is consistently good. I’m looking forward to reading more of this series. I recommend this author’s books. I’d go so far as to say any of her series would be a good bet.