Other books in this series:

Mary Robinette Kowal stunned readers with her charming first novel Shades of Milk and Honey, a loving tribute to the works of Jane Austen in a world where magic is an everyday occurrence. This magic comes in the form of glamour, which allows talented users to form practically any illusion they can imagine. Shades debuted to great acclaim and left readers eagerly awaiting its sequel. Glamour in Glass continues following the lives of beloved main characters Jane and Vincent, with a much deeper vein of drama and intrigue.

Left with no outward salvation, Jane must persevere over her trying personal circumstances and use her glamour to rescue her husband from prison . . . and hopefully, prevent her newly built marriage from getting stranded on the shoals of another country’s war. 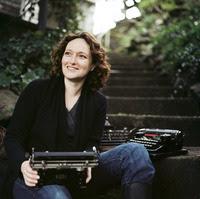 Mary Robinette Kowal was the 2008 recipient of the Campbell Award for Best New Writer and her short story “For Want of a Nail” won the 2011 Hugo. Her stories have appeared in Strange Horizons, Asimov’s, and several Year’s Best anthologies. She is the author of Shades of Milk and Honey and Glamour in Glass (Tor 2012).

Mary, a professional puppeteer and voice actor, has performed for LazyTown (CBS), the Center for Puppetry Arts, Jim Henson Pictures and founded Other Hand Productions. Her designs have garnered two UNIMA-USA Citations of Excellence, the highest award an American puppeteer can achieve. She also records fiction for authors such as Kage Baker, Cory Doctorow, and John Scalzi.

Mary lives in Chicago with her husband Rob and over a dozen manual typewriters.

Book Two in the series is just as good as Book One was! This one is Jane and Vincent’s story. They’ve gotten married and they go off on a honeymoon rather than to visit her parents after a dinner with Prinny, as he asked Jane to call him. It was a high society dinner Jane had no experience with and ended strangely with a long wait for Vincent while he added something the Prince had asked him to add to the glamural they had created. Jane ends up being sent home by Prinny and his mistress in a carriage and Vincent comes home in the wee hours exhausted and in a rather bad mood. Jane is in her own bad mood when she finds out he stayed to change something that they had designed together. Two grumpy people in one marriage! Yikes!

People at the dinner kept asking Jane about her trip to the continent, but Jane knew nothing about it. She tried to cover up with neutral comments until she could speak with Vincent the next day. That’s when she found out they were going on a honeymoon and that Prinny was providing them transport on a ship in two day’s time. So nice of him! But why hadn’t Vincent discussed this with her?

On the continent, Napolean is still on Elba, and all is well between the French and Brits. But French society has always been a bit (?) looser than British society and Jane gets her eye-full at one dinner when the ladies don’t leave when the port is served. The goings-on rather insults and embarrass her in fact. The French have a good laugh at her expense and she bears up under it well, but not happily. In England, only the Prince brings his mistress to the table with polite society!

For about half of this book, Jane is unaware of what her husband is actually doing. She just knows he’s acting strangely and isn’t telling her anything. She’s terribly tempted to spy on him when the English-French maid they have returns his travel desk’s key to her one day with some laundry. But she’s a good wife and doesn’t snoop. She returns the key to him. But she soon knows what’s going on and Napolean is loose again and headed in their direction.

Jane suffers an incident after working glamour and faints. The doctor is called and she is told she cannot work glamour until this is over. She is not happy about this, but she complies. Until it is their lives or glamour. It has the expected results and Jane feels terribly guilty about it. But she also feels other feelings that she hadn’t expected. She really needs Vincent’s support, and he rises to the occasion and surrounds her with love and care.

There are no sex scenes as this is a JA re-tale. The violence is referred to after the fact or downplayed politely, off in the distance. It’s all in what might be considered JA style. The pace is good. Things move along and you go right along with them. If there is any problem, it’s the distraction of the glamour students, but they are only red herrings.

In true Jane Austen style, every time Jane has to go somewhere, she writes to someone to tell them where she is going and with whom. Even when she runs off into the face of Napolean’s approaching army! Jane Austen would be so proud of her! I know I was! Hope you enjoy reading this second installation in the Glamourist Histories! I highly recommend it. I’ve already bought the third one.