Synopsis: The red words painted on the trailer caused quite a buzz around town and before an hour was up, half of Antler was standing in line with two dollars clutched in hand to see the fattest boy in the world.

Toby Wilson is having the toughest summer of his life. It’s the summer his mother leaves for good; the summer his best friend’s brother returns from Vietnam in a coffin. And the summer that Zachary Beaver, the fattest boy in the world, arrives in their sleepy Texas town. While it’s a summer filled with heartache of every kind, it’s also a summer of new friendships gained and old friendships renewed. And it’s Zachary Beaver who turns the town of Antler upside down and leaves everyone, especially Toby, changed forever.

With understated elegance, Kimberly Willis Holt tells a compelling coming-of-age story about a thirteen-year-old boy struggling to find himself in an imperfect world. At turns passionate and humorous, this extraordinary novel deals sensitively and candidly with obesity, war, and the true power of friendship.

When Zachary Beaver Came to Town is the winner of the 1999 National Book Award for Young People’s Literature. This title has Common Core connections. 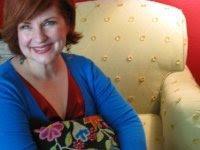 Kimberly Willis Holt is the author of the Piper Reed series, including Piper Reed, Navy Brat, Piper Reed, Clubhouse Queen, and Piper Reed, Rodeo Star. She has written many award-winning novels, including The Water Seeker and My Louisiana Sky, as well as the picture books Waiting for Gregory and Skinny Brown Dog. A former Navy brat herself, Holt was born in Pensacola, Florida, and lived all over the U.S. and the world—from Paris to Norfolk to Guam to New Orleans. Holt long dreamed of being a writer, but first worked as a radio news director, marketed a water park, and was an interior decorator, among other jobs. A few years after she started writing, her third book, When Zachary Beaver Came to Town, won a National Book Award for Young People’s Literature. She resides in West Texas with her family.

I was loaned a copy of this book by Mr. Easley. I am voluntarily providing an honest review in which all opinions are fully my own. I am not being compensated in any way.

The writing in this middle-grade book is simply wonderful. I wish Ms. Holt wrote for adults. The pictures she creates with her words are beautiful. This is what she wrote about the evening when they released the ladybugs just before sunset. “it’s as if someone has dumped rubies from heaven. Soon they will land on the plants in search of bollworm eggs. But right now they are magic–red ribbons flying over our heads, weaving against the pink sky, dancing up there with Mozart…One group of ladybugs soars high into the sky, then suddenly dips low like a flock of birds flying perfect rhythm.” If that doesn’t paint a picture in your mind, nothing will.

The characters were well-done, too. Cal seems to be such a little stinker, when in fact he is the one who instigates some really nice things. He’s the idea man behind Toby’s action. For instance, he’s the one who suggests going to the drive-in. He’s also able to keep a secret, especially when it’s not anything anyone else needs to know.

Toby. Poor Toby is having a really tough summer. His mother has supposedly gone off to a singing contest, but he knows the truth deep inside. He knows she’s not coming back and he’s really angry with her. So he stops reading her letters and won’t speak with her on the phone. And he’s there when the Army comes to Cal’s family to tell them that Wayne won’t be coming home from Vietnam. And he had so looked up to Wayne and all the thoughtful things he had done. He had been a real role model for people all over town. And when he finally gets a chance with Scarlett, she tells him she likes him because he’s the nicest boy in town, but she doesn’t like him that way. Then he and Cal have to remake their friendship and he learns that true friendship can’t really be broken. It’s a summer for taking steps away from childhood. For learning some hard truths. For finding out there are some things you can always count on. For learning what is worth the effort in life.

This is a middle-grade book, but it still has things to say to an adult. It would be a great book to share with a child in that middle-grade age and share its messages. Let’s see what Mr. Easley’s class has to say about the book. They were asked to answer these questions for me.

Another student had this to say, “My favorite part was at the end of the book because it was a satisfying ending to the book. I’d rate it a 5/5 since there is so much complex storytelling that I haven’t seen before.”

One of the girls said ” My favorite character is Kate because she’s always doing the right thing. My favorite scene is when the military police officer people come and Mrs. McKnight already knows what they’re gonna tell her and she gets all sad.” Another student had this to say about that same scene. “My favorite part in the book is when they found out Wayne had died…because I can actually feel bad and think of what is gonna happen next. Also, it makes me think about the characters more and how their lives are about to change drastically. Also of how Toby is gonna react when he finds out since he wrote him a letter.”

A couple of the other girls liked Scarlett, though, because she tried to be nice even when she was telling Toby she didn’t like him as a boyfriend, just as a friend.

This was my favorite review by one of the girls because it is most like my own opinion of the book. “My favorite part of the book is the ladybug waltz because it brought different families together. And the way the author described that scene was very descriptive. It was almost like I was there. All the details it talked about, I could see the scene in my head. And this part of the book Cal and Toby forgave each other and everyone was thinking of Wayne and how he served in the army. My favorite character was Ms. Mertie Mae because even though they didn’t talk about her a lot she always helped in a way. When they did talk about her no matter what she always had an answer. Rating ✰✰✰✰✰”