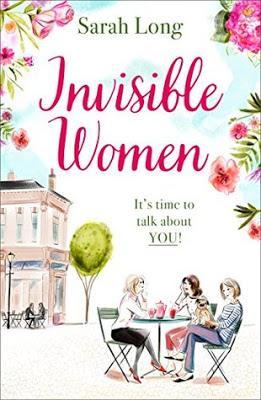 Also available in paperback and audiobook

Sarah Long has put herself into the ranks of Jill Mansell, Patricia Sands, Connie Chappell, and Anita Hughes with her book Invisible Women. She takes Tessa, Harriet, and Sandra, who have been friends forever and are now all passed their 50th birthday, and challenges them to find something worthwhile within themselves. Each of them sees something a bit different. Sandra is still slim and active and has the youngest child among the women. She still sees herself as young and sexy. She also has a young builder working around her house. Her husband is depressed and is in counseling with a life counselor who seems to be helping him a lot.

Tessa feels a bit frumpy and has just sent her “baby” off to university. She’s been stalking her daughter on Facebook and runs into an old boyfriend of her own on there. He seems to be interested in getting together when he’s in town on business to talk over old times. Her husband goes off to his high-paying job each day with some snipe at her. Lately, he’s been doing it more and more. She prepares gourmet meals and he has always enjoyed them. Now he’s making remarks about how she’s overdoing it.

Harriet’s mother-in-law has always been healthy and independent, until this latest diagnosis. Now, she’s living downstairs and Harriet is her caretaker. She takes her to all her doctor appointments and waits on her hand and foot. Her husband gets up and goes to work each day and leaves it all to her to handle. Then one of their dogs dies and her husband wants to have a talk with her.

Each woman seems to be at something of a decision time or change of passage in their life. One where what they’ve been doing is no longer going to work and it may hurt or it may feel really good, depending on how you look at it or how the other person in the relationship feels about it.

The technical bits and pieces:

The characters were done quite well, especially Tessa, who I think really got the most coverage in the book. I liked her the best, too. Sandra’s story got the second most coverage it seemed, but it also seemed to be slipped into some cracks and into shadows. That may have been a perception, though, because I saw Sandra as sneaky. And then there was Harriet, who had small blocks of time to tell her story. Poor boring Harriet. She wasn’t, but she was made to seem to be.

The storyline was excellent. This isn’t an unusual storyline for Women’s Lit, in fact, it’s fairly common. It’s what the author does with it that makes the story. And Sarah Long had a wonderful time with it. She treated it like a new Christmas tree and decorated it in her own special way, made it her very own with excellent pacing and a tension that hung on to you right up until the very end.

So, if you don’t want any SPOILERS, this is where you STOP reading…

I usually enjoy this type of book about a group of women, but this one by Sarah Long was particularly good. I think the tension and pace of it really made it good. There was no dragging, no lag to it. It just kept moving along and telling its story and holding my attention right up until the end.

I found myself reacting to the characters, not the writing, which tells me the author did her job well. For instance, it wasn’t that I didn’t like the way Sandra was written, I didn’t like Sandra. She was sly and always had to have a man to play off of, even if it was her best friend’s husband or her daughter’s boyfriend. As long as it wasn’t her own husband. I was glad everything ended up falling apart at the end in all her relationships, even though it meant she got her man.

I really like Tessa. She was usually upbeat and fixing something that sounded delicious to feed someone she loved. She worried about her son and daughter and hadn’t quite totally settled into being an empty nester yet. She put up with her husband’s snide remarks with more patience than I would. Then, when John finds her on Facebook and wants to get together for lunch while he’s in London, she figures, why not? Now, that “why not” has a lot of guilt tucked into it because married women aren’t supposed to get together with old boyfriends. When John’s trip gets canceled and lunch turns into dinner at a fancy resort, it becomes an even guiltier secret. Now there are real lies involved. But she gets caught up in the whole thing and one thing leads to another until she has to stop and think about it. She makes her decision about what is important to her, her family or John. She asked herself the real questions. The practical questions about what her life would be like. How would she see her children? How would they view what she was doing? And she asked herself what was really important to her. And who she really loved.

It was no surprise when Tessa made her decision. You knew her values already. She wasn’t Sandra. Tessa’s family was her center. It’s what she valued most. Her husband, Matt, was who she loved. And she needed to be close to her children. It was the way she faced her husband and dealt with the situation that was so amazing. He had a few surprises of his own, too. It was a really eye-opening conversation.

And don’t forget Harriet. Yes, even she has her moment and her reward. Totally out of nowhere, but her husband, Sam, is a quiet one. But apparently he, too, appreciates what a good wife is worth over the years. So in the end, they all got what would make them the happiest. And you know how much I love a happy ending!