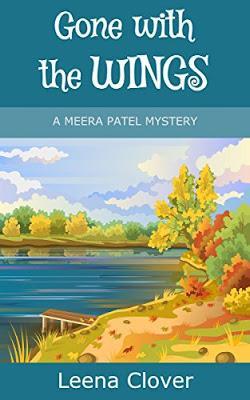 Meera Patel is an Asian-American woman who has dropped out of grad school and now works at the local university library shelving books and telling students where to go. Yeah…

Meera’s father is a highly regarded professor at this university and has an assistant that Meera absolutely can’t get along with. The two young women have been enemies since they were young children. They even have trouble being polite to one another.

So when the assistant is found floating in a pond, Meera is the logical suspect. Even some of her friends and family look at her strangely. Then she is accused of a second crime and has no defense.

Meera’s best friend, Tony, runs the gas station in town. He and Meera start trying to work out who really did it and if the two crimes are related so the police will stop harassing Meera.

The cover is rather delightful with its folk art painting look. The lovely medium teal blue with the fall colors against it really makes a lovely eye-catching color scheme. And the style of the artwork is charming. High marks for the cover!

The storyline was rather good. It’s one I’m sure we’ve all read in any number of books and seen in movies. But Ms. Clover has added some aspects to distract from that.

The characters, for instance, were highly attractive and diverse given their culture and the fact that they still participated in the many aspects and festivals of their culture. They wore the costumes and used the many props of their culture without embarrassment or stigma. They kept the richness of their cultural activities alive through the celebration of their holidays, clothing, and food. Particularly their food.

The pace was brisk and kept your attention on what was happening or might be coming up next. It seemed that there was always something going on. Usually another meal. The tension wasn’t significantly helped by all the things that went on. Some things simply happened and really didn’t seem to move the story along in any way. It was a side activity.

I obviously don’t like food anywhere near as much as the author does. It seemed like any time Meera stopped to breathe in the book, she had to eat. Whether she cooked the food or someone else provided the food. And we were treated to a full description of every item she ate. If she cooked it, we were given the whole list of ingredients and had to cook with her. They even talked about food a lot. It got to a point that I started skipping those parts. I hope I didn’t miss anything important.

I did like the way Ms. Clover defined the relationship between Meera and Tony. They obviously had been friends since they were children and have remained close. They are just waiting for the right time to take their relationship over the line to make it more than a friendship. It was only mentioned once, but it set the tone for how they interacted with each other and others.

I’m not convinced of the believability of the conclusion. It just didn’t seem feasible to me. Two schools, two states, two countries. Just too disparate for me. Just my opinion.

A question for the future series…

Who was the woman in the rental car who picked up the missing girl and was she the same woman who followed Tony and Meera to Wichita? Could it be she’s finally fallen out of the tornado? I know that’s more than one question, but it’s all tied together as you’ll see once you read the book.