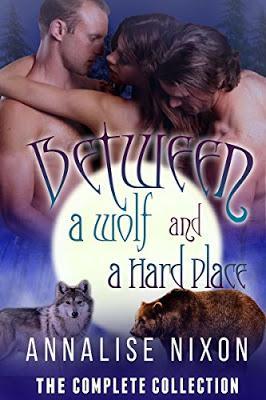 Only in digital format

Iris is sweet, sassy, and curvy. She’s also been kidnapped. Iris, her sister, and her BFF were grabbed by some really nasty guys. The gals swore they would get free and make sure that all three of them were safe. Then they were drugged. When Iris woke up, her sister and friend were gone. She managed to get away from the two guys who had her, but when she woke up again, two different guys had her. And they couldn’t have been more different. These guys were both really hot looking, built, and tattooed.

Barron and Evan were BFFs, too. They did everything together. Evan even joined Barron’s wolf pack, though he wasn’t a wolf. They had always hoped to find the right woman to share for the rest of their lives. To them, Iris seemed like a gift. She’s lovely, curvy, and tattooed. What more could they possibly want?

Iris has her mind set on freedom and finding her sister and BFF. Can Barron and Evan change her mind long enough to make her theirs?

The storyline was good. It was full of twists and turns. Information kept popping up and things kept changing.

The characters were well developed and we learned more with each chapter. With Iris, most of her information was upfront and she shared it. With Barron, most of his came towards the beginning. But with Evan, we had to wait until later on to get to know him very well. But it was worth the wait.

The pace was a bit irregular. Sometimes we were running around trying to get away and others we were just sitting around the cabin being bored. It sort of stuttered.

The tension was a bit uneven because of the pace and some of the characters.

The good, the bad, and the ugly…and how much it lit up my life… ✰✰✰⭒

Iris was what the average guy seemed to consider a little on the “chubby” side. Full-figured? The first guys who kidnapped them made snarky comments about her figure calling her “the fat one”. So when she was first with Barron and Evan she didn’t expect that they would like her figure. She really had hang-ups about her appearance. She didn’t expect men to be attracted to her. But they really liked what they thought of as curvy and sexy. In fact, it seemed like all the wolves in the pack thought that about her. Certainly, Bryce and Shane shared that thought about her. She had self-esteem issues, but both of the guys went to work on those right away, and they got through to her. I really like the fact that they realized she had issues and they immediately went to work bolstering her up in that regard. They also genuinely liked her figure, so that helped. But they did it all with intent.

Evan isn’t a wolf, but he and Barron have been together so long and so close, sharing everything including women that it’s just one more thing to share. And the pack seems to accept him for what he is. He’s certainly useful in a fight. But Evan decides Iris needs the support of the pack and he should bow out, he really hurts her. Without talking to her about what he was doing, why he was doing it, or whether or not she wanted it. He just shut down! Shut off!

When Iris gives Barron the choice of her and the pack or Barron, he panics and she’s hurt again. That’s when Shane steps up and becomes her friend and confidant. Finally, someone, she can talk to and relax with. But he’s also in charge of security and under orders to take good care of her. Since the three have gone through a mating ceremony, the pack will take care of its own if the guys can’t get their heads screwed on straight. It’s wonderful that Shane becomes such a great friend, but it’s too bad that he has to be ordered to do it. They did have a rocky start, but still, it would have been nice for it to be a genuine friendship from the beginning. They did become real friends in the course of the pretend just because Iris is a really great person.

But someone better make up their mind pretty soon because the Montgomery Pack is already in town and they want Iris. It appears they already have Sherry, Iris’ BFF. No need to worry there, though. It seems Barron’s brother, Alexander, the one that’s 10 minutes older and a heck of a lot tougher, is going to rescue her. Don’t know much about him, yet. I’m hoping Sherry and Alexander have the next book. He sounds rather intriguing.