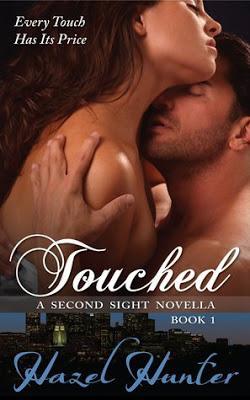 Ben Olivos, Assistant Director of the FBI for the Los Angeles Field Office has a daughter who has disappeared. He’s called in the FBI’s best profiler, Gavin MacMillan.

His wife, Anita, has called in her psychic, Isabelle de Grey. The director is not happy. Neither is the profiler. All psychics are fakes. Aren’t they?

But what if she isn’t? One touch brings her his other thoughts, too. “He likes my legs? He thinks they’re shapely? Psychobabble? Pretty pink lips? Hot.”

Can Gavin and Isabelle keep their thoughts and their hands working on finding Esme before her kidnapper turns into her killer?

The cover is eye-catching, but it really doesn’t relate well to the story. At least the one that was on my copy of the book, the one at the top of my review. The small one I show to the right here is a newer one that coordinates with the rest of the series, and it is even farther from the story. This story is about a woman with psychic touch abilities. She should be on the cover with her brunette hair.

The storyline is really good. It’s realistic in that it could work.

The characters develop through the course of the story fairly well. They aren’t the deepest couple I’ve met, but they aren’t too shallow.

The pace is good. Ms. Hunter keeps you hopping from scene to scene to figure out what’s happened and to save Esme.

The tension is there throughout the chase. The author has the knack of blending the tension of the case with the tension between the couple really well.

Writing quality is quite good. There is a lot of description in this book. The author makes you see things so that you experience them more intimately.

And this is where you STOP if you don’t want to see any SPOILERS...

The cover really doesn’t have much to do with the story. The city skyline and a hunky guy with a black armband or bandage. Nope. Not even close to relating to the story. This takes place in LA. That’s probably a picture of LA’s skyline, but I really can’t tell. But the profiler on the cover doesn’t do it. He wasn’t the story. Her psychic ability with touch was the story. She should have been on the cover. And she should have had the correct features – pink lips, long brunette hair and great legs. With all the description in the book, the attention to her appearance would be important on the cover.

The police aspects of the story seemed very well done to me. The only thing that wouldn’t have been done, is that the psychic wouldn’t have been allowed in there. But their conversations about the status of the case as things changed seemed realistic.

Ms. Hunter wrote the love scenes like she was frosting a cake, with long, smooth strokes. The scenes were really drawn out and steamy. She describes every lick and stroke between the couple from start to finish. And it was obvious that both of them had been without for quite awhile and had to make up for lost time. This one can definitely be classified as hot and steamy.

One weird little twist that I’ve never come across before occurred at the end when we get to witness the kidnapper toss away his disguise. He was practically rubbing his hands in glee looking forward to doing this sort of thing again. He thought LA was a great little place to do it and walked away chortling about it.