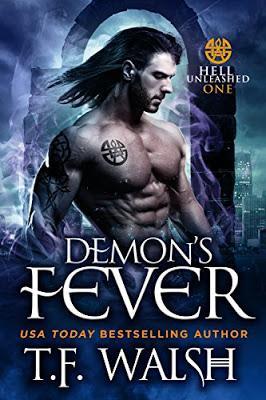 Cary Stone’s father disappeared a couple of years ago. She’s out of a job and now she’s out of an apartment. She’s a half-breed demon, but she’s a great demon hunter.

Levi Walker is a kick-ass demon hunter trying to catch the demon who killed a friend. He offers Cary a place to stay and tries to help her get a job.

Will the attraction between them mess up their demon hunt and leave them both jobless?

The cover is certainly eye-catching and Levi is definitely a part of the story so we can say it relates.

The storyline is good. Damsel in distress helped out by tough guy. Tough guy and gal come together. One of them messes up and they split.

The characters are done pretty well. We know a lot about Cary. We know most of Levi’s stuff, too, I think. The secondary characters aren’t in focus too much, like Brent Moore, Tasha, and Jack. They may stay peripherals or they may become more important.

The tension just kept building up. This gal didn’t get much of a break from the beginning. It all starts with her father disappearing. Did he leave for her protection or was he taken? She’s not sure.

The good, the bad, and the ugly…and how much it lit up my life… ✰✰✰✰⭒

There was definitely a feeling that Brent Moore was testing Cary harder than she tested the guys and yet Levi was remembering his own testing and how tough it was. It seemed like his was just as tough in relation to him. So I don’t understand the slant on the testing ahead of time. Though having your second testing the day after you get your bandages off following eye surgery is a bit much. It’s amazing she still had eyes after that.

Levi is quite the character. First, he’s the helpful guy who’s giving her a place to stay and really trying to keep his hands off her. Not take advantage of her. Then he’s the super lover once she gives the go-ahead. Thoughtful, too. The whole time he was chasing down that Corvette, he was thinking about Cary still sitting in that restaurant. Thinking she would be okay. He thought over and over about her. Just before he took another turn after the Corvette. Then, when she needs a demon stone to get the job she’s been testing for, he takes the stone for his own needs.

So, why does Brent Moore still give Cary the job when she doesn’t have the stone? He’s a really shady character. He seems to be waffling on what she has to do to get a job with him from the beginning. He changes the terms of his bargain with Levi, too. I just don’t trust him. I’m interested in seeing if he gets worse in the next book. To see if he becomes a problem or not.