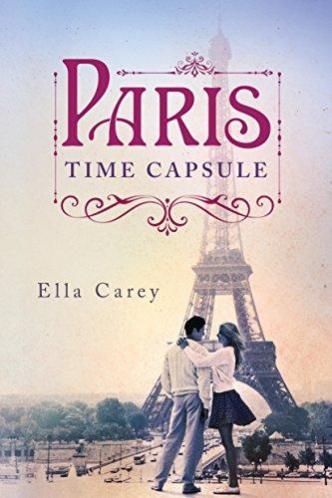 I purchased this ebook at the current price. This is my honest review for which I am not being compensated in any way.

Cat Jordan is a photographer. In the mail she gets a box containing a letter and an old brass key. The letter tells her that she is now the sole heir of the estate of Isabelle de Florian. The estate had originally been left to her late grandmother, Virginia Brooke. It would have passed to her mother, but her mother has also passed away, so that leaves Cat as the heir. But Cat has never heard of this Isabelle de Florian. And she doesn’t understand why she has to go to Paris to find out anything about this estate. The lawyer won’t tell her anything over the phone or e-mail. Christopher, her rich and elegant boyfriend thinks it’s a waste of time, but cheerfully keeps in touch by e-mail while she’s away. He’s very supportive of her, but does encourage her to come home soon.

Cat loves vintage clothing and anything vintage. She wears vintage clothing and jewelry. She uses vintage pieces in her apartment. So when she finally gets to open the estate, she’s absolutely in love! But we have to back up here a bit, because something really big happens before she gets to see the estate. Remember I said she was the sole heir? Well, standing around waiting for her at the estate, is Loic Archer, the son of Sylvie Archer, who is the daughter of Isabelle de Florian. So why is Cat the heir to Isabelle’s estate? That’s not an easy answer. In fact, it takes the whole book to answer that question and it’s got a lot of twists, which were really great!

To get to that answer, we have to have Loic and Cat do a whole lot of talking about who’s who and why and why not about the estate and then they open the door! Behind that door is a Paris apartment of a demimonde of about 40 years before, before the war. No one had been inside since the door had been locked when she left, when the Germans marched into Paris. The cobwebs and dust created a fabric of their own over everything. It was a choking miasma in the air that almost brought Cat to her knees. Loic went through throwing open all the shutters and windows in the place to let in light and air until they could see and breath again. What they found was like a treasure box, especially to someone like Cat who was so taken with the period.

Then they have to make a trip to meet Loic’s mother to try convince her to accept the inheritance from Cat, since she feels is really belongs to the family. We get to know the family and lots of the story behind Isabelle de Florian as Cat and Loic start digging into what happened after Isabelle and her maid locked that door just before the Germans took control of Paris. It’s getting plain to everyone around the two investigators the Loic is getting in deep with his feelings for Cat. Plain to everyone but Cat, that is. Christian has come for a weekend and proposed, so she’s now busy fielding e-mails from him and the wedding planner that’s been hired. She’s an old girlfriend of Christian’s, but his mother thought she’d do a great job anyway! Cat is finding it more and more difficult to make decisions about a wedding that’s coming closer and closer while being neck deep with the past and present colliding in Paris and the magic that she feels happening that she’s not supposed to be feeling before her marriage to another man. Then Loic gets frustrated with the hunt for information, calls it quits, and takes himself off to work on his vineyard.

So Cat decides to tidy up loose ends and accept things the way they are. In NYC with Elise, her wedding planner, Christian, and his close circle she’s brought up short by a toast to her as now “being one of us”, the rich and privileged. She also notices the cut-throat way Christian has started doing business. One of his business deals has cost a man his business and the money to fund a young boy’s cancer treatment. Cat calls off the wedding, organizes the sale of the portrait found in the apartment of Isabelle de Florian so the proceeds go for the boy’s cancer treatment, and arranges a gallery showing of her Paris pictures, also to help with the treatment. At the end of the show, there’s our handsome Frenchman again, who just couldn’t stay away.

There are letters left for Cat along the way in case the person who was left with the connection was dead by the time Cat got that far in her search. And it’s a good thing those letters existed, because they were needed right up until the final letter! The one that explains what happened after Isabelle de Florian and her maid locked the apartment door and attempted to leave Paris ahead of the Germans.

There are two more books in this series. This book can certainly be read as a stand-alone. It is a complete story within itself. But I want to read the whole story, so I bought all three of them when I made my purchase. You will definitely be seeing the reviews for the other two books some time in the next couple of months. They are already on the list to be read. So I will share the story with you.

I hope you will take this journey with Cat and Loic to find out what Isabelle de Florian’s story is and what happened after she and her maid locked that door. It is fascinating to go with them as they uncover her story, her life, all the while enjoying Paris and all the areas Isabelle had been to that they went to for more evidence. Cat’s a photographer remember, so she shows us as she photographs the areas they go through. It makes for a wonderful journey! And Cat and Loic are wonderful companions.

#2 From a Paris Balcony

#3 The House by the Lake