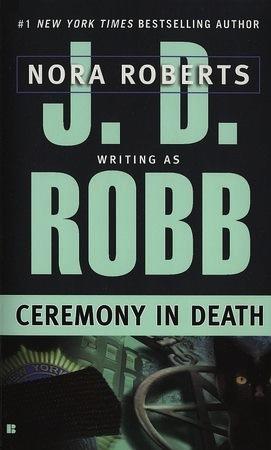 I purchased this book as part of a 5 book set on BN.com for nook. This is my honest review for which I am not being compensated in any way.

Detective Sgt. Frank Wojinski was 62 years old when he died of an apparent heart attack at home alone. He was survived by his wife, Sally, their son and wife, grandsons Pete and Jamie, and his granddaughter, Alice. Alice Longstrom has a strange message for Dallas at the viewing for her grandfather. She says she’s in danger. She asks for a meet with Dallas and tells Dallas she’s in immediate danger. Alice can’t tell her anything about this danger, just that she is in danger. There are other contacts to be made, so Dallas has Peabody follow Alice to be sure she gets home, but Alice never gets home. Alice runs in front of a vehicle and is killed. The only witness other than Peabody is a black cat.

Dallas turns to the folks at Spirit Quest to get more information, since magic and witches isn’t exactly her field. She talks with Isis Paige who is a Wiccan priestess and herbalist and her partner Charles “Chas” Forte. They are an odd couple from most appearances, but they seem willing to help and full of information. But as with all her informants, Dallas investigates their backgrounds, and what she finds on Chas has her wondering if she’s found her culprit. Chas and Isis admit to his background without hesitation, but Dallas still pulls him into interview for a tough grilling. His father had been a horrible cultist leader and treated people brutally to the point of murder. Chas had not missed out on his father’s treatment as a child.

The other group that Dallas speaks with isn’t quite as cooperative or truthful as those at Spirit Quest. The group of Black Satanists under Selena and Alban are pretty weird as far as Dallas is concerned. Lobar is their young punk who seems to think only of sex, the more brutal the better. And then Roarke gets Dallas a listing of their membership, which they had not been willing to provide, and she starts working on some of them, all upstanding citizens that they are. Mr. Wineberg was going to talk, but he got nervous and ran, and then he was dead.

Mr. Trivane contacts Dallas. He had started remembering things after seeing the scene of crime photos during his client’s interview. It wasn’t all clear to him, but he remembered enough to know that things weren’t right and he wanted to talk with Dallas. Alban decides it’s time to take care of the problem and he snatches Dallas from her car. But Dallas has a guardian angel she is unaware of. Jamie Lingstrom, Frank Wojinski’s grandson, is into electronics and has bugged her car. He heard the entire abduction taking place and knows where she’s been taken. He contacts Roarke and she’s rescued. Of course, she’s almost rescued herself by the time he gets there.

There’s a run in with Feeney in this one that really makes you want to cry. Eve is handling this case alone. No one but she and Peabody are allowed to know what’s going on, per orders of the Chief. It’s got to be that way because there’s a pending internal investigation into this case he’s trying to get cancelled. So she can’t tell Feeney anything, even that she’s handling it, really. Feeney finds out and goes to pieces all over her. Basically, he guts her with every hurtful thing he could possibly say. He’s suffering from the grief of losing a very close friend in Frank Wojinski and his goddaughter in Alice Lingstrom. He hits Eve with it all. It takes a talk with the Chief and one with Roarke to get his butt back in line and make him aware of what he’s done to Eve.

Speaking of butts, Mavis’ styling friend Trina makes a visit to Eve. She needs a haircut and they do a total body treatment as well. One thing Eve is unaware of until Roarke notices it is the little rosebud tattoo on her butt. It’s a temp, but Roarke is quite taken with it and is having a great time teasing Eve about it! As do the cops who see it in the locker room! Another great addition to the series!

The story line was very good. The characters were done well, especially Chas with his detailed background. The pace was rapid, but not too hard to follow. The tension was sky-high the whole time with the creepiness of the black magic and murders! The covers are looking good on the ones I have. This series has had several sets of covers.

2 thoughts on “Ceremony in Death”