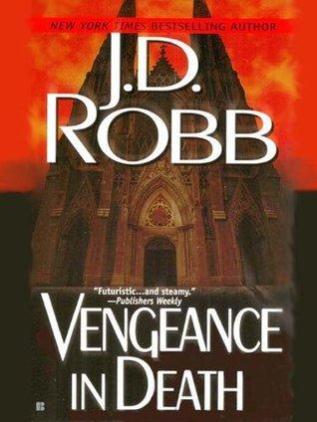 Vengeance is mine; I will repay, say the Lord.

The cover is wonderful with that soaring cathedral. It relates so well to the story itself as the killer feels he is God’s right-hand man. The story is really good because it reveals a huge amount of Roarke and Summerset’s history. There’s even a trip to Ireland for Roarke and Dallas. The characters are done well, as we know most of the returning cast. There is the introduction of Ian McNab in this book. He was intro’d in bits and pieces and seemed a bit out of focus. He did get in his line about Shebody towards the end. The pace was a little off with this one, I felt. The transitioning between scenes with Summerset and Roarke as suspects and then getting into the killer’s mind, then the group meetings. A bit of a rough ride. The tension was great, though. Right from the beginning up until the ending.

We’ve heard in previous books about how Summerset’s daughter, Marlena, was tortured and killed while they still lived in Ireland years ago. There were six men involved in her death, each killed in a different, horrible way. Retribution brought about by none other than Roarke himself.

So far, Dallas has three murders, each done in a different horrible manner. Each with an eye removed. Each with a statue of Mary, the Blessed Virgin left at the scene as if watching the event. Each of the victims is a former friend of Roarke and Summerset’s from the old days in Ireland. So Eve has to clear Roarke and Summerset of any culpability before she can go looking for the real murderer. Unfortunately, Summerset makes it difficult. He’s caught on camera going into the apartment building of the first murder and not coming out on the day of the murder. The woman he was supposed to be meeting was somewhere else that day because she got the date mixed up. Dallas tries really hard to protect him, but Summerset is very set in his ways, he likes his routine. So he goes out for his morning constitutional on the day the second murder happens. He is actually there at the scene of the crime when Dallas gets there. Dallas pulls him in for questioning and really grills him. By the time the third murder has been committed, Dallas has a better handle on what is happening, but this case has absolutely torn her marriage apart. She and Roarke have a horrendous shouting match with words that are meant to hurt, and they do. They sleep apart that night, not that either really gets much sleep. The next morning they both say sorry and work closely on the case from here on out.

Dallas has been car bombed and hit with a souped-up surgical laser twice. She’s supposed to be taking time to recuperate. But what she’s actually doing is quietly getting on Roarke’s private jet and going to Ireland to do what they need to do. Roarke has to go to take Jenny’s body back for a wake and funeral, the third murder. Dallas needs to speak with the police about the old cases. Everyone Roarke introduces Eve to has the same reaction, “You married a cop?” But as Eve says, no one thinks twice about the fact that she married a criminal. But because Eve is Eve, they all like her.

In a search of Summerset’s private rooms, which makes both Roarke and Dallas feel like they are intruding on his privacy, they find that his rooms are bugged. His lady friend is a painter and behind her painting is a listening device. So they get into Audrey’s apartment and find that there are listening devices there as well. Dallas investigates Audrey’s background thoroughly and discovers a connection to Roarke’s past. She was married to one of his six victims. She has a 19-year-old son, Ian, who she has raised to be a killer. Specifically to get retribution for those six kills and to take out Roarke and Eve. Ian is a wiz with electronics, that’s how he’s been able to by-pass all the security and cameras involved and do the bugging to listen in. He’s also been able to bounce his signal all over the place to the point that Roarke and McNab working together had a really hard time finding him. But find him they do. His mother, Audrey, had raised him to believe he was the doing God’s work and that killing these people was his mission in life. What a twisted life to create for someone you are supposed to love and protect. I think this book had a bit of the creep factor for me because of this.