I purchased this book at the current price. This is my honest review for which I am receiving no compensation of any kind.

The cover is in the style chosen for the series, which is totally eye-catching. It always has Mandy on the cover in some fashion outfit appropriate for the story, crime scene tape across the front, and it is seasonally decorated. This time we have a Halloween pumpkin. Whoever it is that does the graphic design for these, really does a great job. They are always fun. The story is great. It takes place just before Halloween, so there are lots of ghostly visitors. The characters are really quite familiar to me by now since the stories always focus on Mandy and her coterie of friends and associates. The pace is fairly brisk as is typical for a book in this series, and the tension just keeps going.

One thing I noticed about this series is that you get a short book, about 120 pages and then you get about 30 pages of teasers for other books written by the author. I don’t like that. Amazon lists this book as 171 pages, but when I was done reading the story itself, I had completed 118 pages. The rest of what was there were excerpts from more books in the series and other books that the author has written with links to them to buy, and I’m not talking just one or two. I don’t like it and don’t think it’s necessary. I also don’t think it sells those books in there. I’ll bet most people do what I did and just skip over them. Okay, complaint registered. On to the fun part…

At Rick and Amanda’s wedding, Clara (Rick’s mother – ghost) takes over the body of Alice (Rick’s stepmother) so that she can dance with Dan and Rick. Alice doesn’t remember any of it. Clara’s usually off keeping herself busy, but lately, she’s spending a lot of time with the family and being involved with the living. This time, it could get dangerous for those she loves.

In the cemetery where Clara’s body lies, a young man’s ghost is stuck in a pond where he died. He spends a lot of time howling and crying about his situation and disturbing the residents of Clara’s cemetery. So Clara goes to Jackie for help and Mandy ends up involved, of course.

It was Fynn’s birthday and the guys at work had a party for him. They all had quite a bit to drink, except Johnny, who only drank fruit juices. Johnny offered to take Fynn home. On the way, Johnny complained of not feeling well and wanted to stop at a pond in this cemetery he knew that was really pretty. The two stopped. Johnny asked Fynn if he could see the colorful goldfish in the pond. Fynn said he couldn’t. Johnny suggested he look closer, they had polka dots on them. So Fynn leaned over the pond closer…SHOVE…SPLASH. Maybe it was a prank, but maybe it wasn’t. Whether it was or not, Fynn died in the pond, dragged down by the weight of his wet clothes and the fact that he was too drunk to really deal with what was happening. His wife, Nikki, and young daughter, Jennie, were devastated.

His death had been ruled as a suicide. He had taken out a $20,000 loan with no way to repay it and there was a note in his pocket in a plastic bag that indicated suicide. Johnny was more than happy to take his place with Nikki and Jennie and take care of them. Nikki’s trying to tell Johnny thanks but no thanks, but he doesn’t understand why Nikki doesn’t love him. Why he can’t take Fynn’s place in her life, in her heart.

Mandy had already had a chat with Fynn at the pond and understood what was happening. She had shared the information with Nikki so that she, too understood. Fynn and Nikki had gotten married informally, but Nikki had always wanted a big formal reception. So Fynn had made arrangements for one at the place she wanted to have it. He had borrowed the money and put fees in place for the reception that would pay back the loan. Nikki was thrilled when she found all this out. She went to Johnny and tried to explain to him that he needed to leave her alone, but things had gone too far in Johnny’s mind and her turning away from him simply made him snap. Mandy shows up to help her out, but it doesn’t look like the gals will win until her cab driver, Letty shows up and shoots Johnny. But Mandy had called for back-up. She hadn’t wanted to disturb Rick, even though she’d been sitting in his office waiting for him when she found out what was happening. So, she called Mr. Hernandez at the FBI. When backup finally arrives, she had the local cops, the FBI, and USCAB with Rick at the front. He was not too pleased that she hadn’t simply told some of his people that she needed help. In the end, she got her own division of USCAB, but she had to share office space with Rick as a penalty. Which neither of them seemed to mind.

It was fun and interesting as a mystery. It wasn’t too hard to figure out who the bad guy was. A pretty good addition to the series.

And here’s another one… 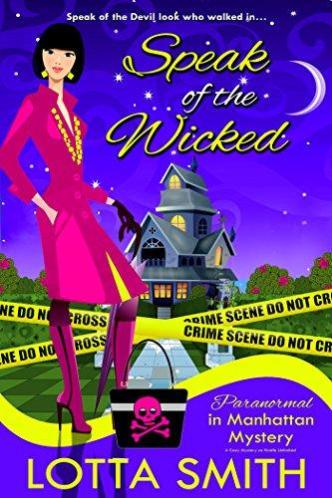 Speak of the Wicked #9

I purchased this book at the current price. This is my honest review for which I am receiving no compensation of any kind.

The cover is again in the style chosen for the series. The cover is always related to the story. Mandy’s outfit, the scene in the background, and the quote on the cover are all related. These covers are very well done. As a student of graphic design, I love these covers! The story is interesting. It takes place mostly in a very short period of time and in one room. The characters in this one are a bunch of people gathered for a seànce along with Rick and Mandy and their client. They are all developed to some degree or other while sitting right there at the table holding hands. The pace is slower than other stories in this line because you just can’t rush this too much with it all taking place in one sitting, but the tension will make the edge of your teeth screech.

Karen Rosenberg is a new widow. She is also a client of Rick’s at USCAB. She’s heard the rumor about Mandy’s being able to speak to spirits, so she’s invited them to her house for dinner and a seànce. Around the table with Rick and Mandy sit Karen, the widow of Michael Rosenberg, Mr. Macomber (friend of the psychic), Ken Tillard (a heartthrob actor), Mr. and Mrs. Grasso (a very important investment banker and his elegant wife, Alexandra), Mrs. Prescott (without her big deal business lawyer husband, David), and Mr. Barnes, the psychic medium who arrives late.

The psychic medium does not see Jackie, Mandy’s sidekick, who is with Rick and Mandy this evening. Jackie is totally outraged that he doesn’t address her or acknowledge her in any way. The fact that he obviously doesn’t see Jackie tells them one thing about Mr. Barnes. He’s a fake. This makes the whole evening suspect. Now they have to watch very carefully and figure out what he really is trying to achieve, if anyone else is involved, and who is the target. It quickly becomes apparent that Karen, the widow is the target. The psychic goes through some parlor tricks with her and Ken, the actor that can easily be explained away if you know what to look for. They finally get to the nitty-gritty of the evening when the culprits reveal what they really wanted to accomplish with this charade. This was all arranged to force Mr. Grasso to confess how he murdered Michael Rosenberg. Mr. Grasso is outraged and denies that he killed Michael.

What comes out in the arguments and evidence is something very different. Something they were trying to keep quiet. Yes, Mr. Grasso had an argument and a physical fight with Michael on the day he died. But the secret film didn’t catch it, so there is no proof that he killed him. Why was there a secret camera filming what was going on at Michael’s retreat? Who was being filmed? No one was supposed to be there with Michael according to Karen. But there were people there with him. But not his loving wife, Karen. Mr. Grasso had been there. Ken Tillard had been there. Mr. Macomber had been there. And the fake psychic, actually a priest, had been there. At different times and sometimes at the same times, they had all been there as Michael’s lovers. Karen had always wondered what was wrong with their marriage. She and Michael had been close but like good friends.

Once all the guests were gone, it was just Karen with Rick and Mandy, and Jackie of course. Michael’s ghost shows up and answers some questions. It seems, his death was just an accident. The fall did kill him, but it was not murder. He was terribly sorry for not being able to physically love Karen, but he loved her and needed her during their life together. He asked Mandy to make sure that Karen understood that she had been the most important person in his life. And that he had been and still intended to visit her. Another satisfied client.

The Series at this time…

*Book 4-Wicked of the Christmas Past

*Book 5-Sweet Wicked of Mine

*Book 8-Wickedly Ever After: Halloween Hijinks

*Book 9-Speak of the Wicked

*Book 10-Wicked as a Christmas Fruitcake