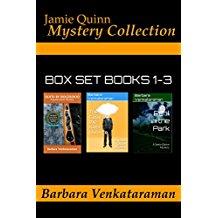 The Case of the Killer Divorce #2

Peril in the Park #3

I was provided a complimentary copy of these books by the author. This is my honest review for which I am receiving no compensation of any kind.

The covers didn’t really appeal to me. The stories were quite good in each of the books providing some depth and clues with which to attempt to solve the mystery. The characters were well-done. The pace had you moving right along in all the stories and the tension was quite good in the first two. In the third one, Peril in the Park, it was up and down with the events of the story.

I am not going to review all three books in this collection. I am going to do the first story, Death by Didgeridoo. This is the one I liked the best and the one that has stuck in my head the most. It’s also the cover I liked the least! Weird, but true.

As I said before, the mystery was quite well plotted and there were clues throughout which could lead you to solve the mystery as you read the book. I figured out who did it but didn’t connect all the loose ends. This is unusual in a cozy, but I really like this. It’s a feature of cozies that I really dislike, the lack of a real mystery with clues that lead to a solution. Usually, the author simply pulls the solution out of thin air at the end of the story with no way for the reader to have known about it. It really irks me when they do that. If you’re going to do that, file it under fantasy.

Anyway, Adam has Asperger’s Syndrome in a very big way. If you don’t know, Asperger’s is on the Autism spectrum and has a wide range of behaviors attached which can be very subtle or very severe. Adam was in the very severe range for his behaviors. His mother, Peg, has really worked hard to provide a safe and comfortable home for him and helped him reach out in any way he feels comfortable. His thing is music. He takes lessons with Spike at The Screaming Zombie. Spike has a German Shepard named Beast who adores Adam. The feeling is totally reciprocated. Spike and Adam seem to have a special sort of relationship and Adam feels safe in this environment.

Suddenly Adam’s world is shattered. Adam arrives for a music lesson and Spike is covered with blood. So is Adam’s didgeridoo. He’s dead. Adam has blood on his hands. “I did something bad! It’s all my fault!” Adam can’t say anything else. He has shut down as only someone with Aspergers can. The police believe his statement to be a confession to murder. His cousin, Jamie, does not. She may only be a family lawyer, but she’ll go to bat for him until she can find bigger guns to help. She has to go up against Nick, a snarky prosecutor who’s looking to run for public office based on his record in his current position, so he’s looking to close this case quickly with the easy answer.

Jamie’s just about lost it, when she calls Grace, her bestie from law school. Grace has always had the gift of bringing calm and order. She still has the touch. With a brief talk, Grace helps Jamie figure out what she needs to do and who she should try to talk with and lets her know that she still has friends. Then Jamie calls in Duke Broussard, a shady private investigator she’s used in the past. His office is a bar stool in a local bar. Between the two of them, they dig and talk and dig and talk enough to figure out what has happened and who done what. I’m not going to reveal the solution. Just tell you there are several love tangles involved as well as a secret mentioned to the wrong person and a grudge. It’s pretty good for such a short story. Great for a cozy. Definitely, an author to try.