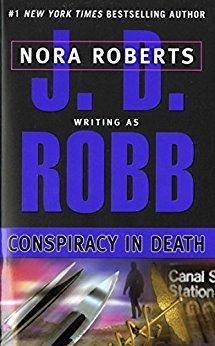 I purchased this book as part of a 5 book series from BN.com for nook at a sale price. This is my honest review for which I receive no compensation of any kind.

The cover is scary and depicts parts of the story very well, as you will see once you have read it if you do. The story is a really good one and carries a lesson to be remembered. When medicine starts working miracles, doctors must remember that they are not God. They do not have the power over man to make the decision as to who lives and who dies, whose life has value and whose life does not. The characters are well done as they continue to develop. We meet two more who will become regulars eventually. Well, actually, we meet three. One we have seen in a previous book I think. Oops. The pace is fast as all In Death books are and the tension is nerve-wracking as always. It’s been so long that I can’t remember all the aspects of these books and can’t remember who did some of these. This was one of those, and it drove me crazy trying to figure it out!

The quote at the beginning of each book is always so appropo, but this one I really like the wording.

“Let us hob-and-nob with Death.” Tennyson

I make a point of going back at the end of each book to read the quotes that the author had chosen and usually find then terribly appropriate. This one with its short wording was right on.

Someone is removing the internal organs from street people and they aren’t asking permission. The first one Dallas gets involved with is Snooks, a homeless guy who makes paper flowers and is liked by everyone who knows him. The two uniformed cops that found him are Officer Ellen Bowers and Officer Troy Trueheart from the 062 Precinct. Bowers isn’t much help and isn’t very friendly, to the point of being obstructive almost. Dallas didn’t like her and sent her off to get coffee and Bowers didn’t like that. In the meantime, Officer Trueheart offered up some helpful information that leads to more information on the case and eventually leads to Troy Trueheart becoming a part of the team. We will see a lot more of him in the future.

Bowers is a troublemaker and has it in for Dallas. They were apparently at the police academy together, where Dallas was something of a wonder woman and superstar. Whereas Bowers barely made it through. Dallas has always been a cop through and through and squared away in uniform before she made detective, whereas Bowers’ uniform is shabby and needs cleaning and repairs. Slovenly is the word that comes to mind actually. Bowers is a complaint filer and she doesn’t disappoint IAB. She files several complaints against Dallas with references going back to their time at the academy when Dallas supposedly used sexual favors to get through. Her claims are wild and not taken seriously by IAB officer Don Webster, another one who will appear throughout future books. He and Dallas have worked together in the past and they are on good terms until he’s the one investigating her. Then she’s not happy with him at all. Nor is she happy with this smudge on her record or the fact that they eventually take her badge and weapon. She just can’t believe they believe any of this of her! It’s not that they believe it, but that they can’t disprove it! The opposition is just that good! Things are eventually disproved, Bowers is killed by a droid and Dallas reclaims her treasured badge and weapon, the loss of which had brought her to her knees. Her whole image of herself is wrapped up in that badge. For them to take that from her was devastating to her. Roarke got her through it. Dr. Mira came as soon as she heard. Dallas pulls herself together and returns to work.

She meets one other person in this case that she will acquire. Dr. Louise Dimatto works at the free clinic because she cares so much. She helps Dallas figure some of the medical things out and finds the records that are hidden in the computers of the clinic. This international group of top surgeons used her little free clinic for the poor and homeless as the front for their dirty work. And all the top surgeons were involved. Some of them more than others and some more willingly than others. Only one was actually killing street people. But he didn’t see them as people. They were just disposable sources. Certain organs with regenerative tissue were harvested. If they could regenerate organs they could eventually regenerate people. They would need to limit the world population because of limited natural resources so it would have to be a selective population. But that’s okay, they would decide who would be part of that population. Now, maybe you are getting a glimpse why the quote is so perfect.