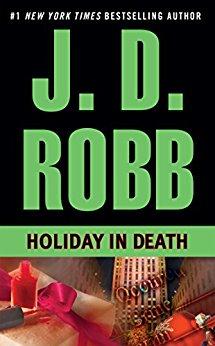 I purchased this book as part of a 5 book series from BN.com for nook at a sale price. This is my honest review for which I receive no compensation of any kind.

The cover on this one is sort of strange, but it does relate to the book, so I have to give it that. The story itself was a bit shaky. I was put off by the use of Santa as the bad guy. Some things should be off-limits, shouldn’t they? The characters, as usual, were spot on. The twins and their clients were as weird as you could want. The pace was fast as Dallas and her team tried to beat the clock ticking down on the twelve days of Christmas and the tension was through the roof.

On the first day of Christmas, my true love gave to me a partridge in a pear tree.

On the second day of Christmas, my true love gave to me two turtle doves…

On the third day of Christmas, my true love gave to me three French hens…

On the fourth day of Christmas, my true love gave to me four colly birds…

On the fifth day of Christmas, my true love gave to me five golden rings…

Well, if Santa comes knocking at your door holding a large wrapped box, don’t open the door, call Dallas instead! In this installment, Santa is the culprit! He’ll do your make-up and hair so that you look absolutely stunning and strip you of everything right down to your skin, then wrap you in tinsel and bows and take your life. You even get a really cute temp tattoo for the holidays. And there’s one more thing he leaves behind that counts off the stanzas of the song. But I can’t give that away. That’s the clue the police keep secret.

In this book, Peabody’s personality and confidence start to develop quite a bit. She starts joking with Dallas and standing up to her some. She’s not so intimidated by her as she was when they first paired up. She still respects her as much, but she’s relaxed a lot and is doing some talking back and ogling the boss’ husband when they “work from home”. She’s even complaining to Eve about McNab and having to work with him. He really irritates her and she can’t understand why. She figures avoidance is the key, so she tries not to have to work with him. The team decides to use Peabody as bait and Santa hits on her as she goes home Christmas eve. Initially, she freezes, but she’s able to get her phone turned on so that the team can hear what’s going on and they get to her in time. McNab is all kinds of crazy over this and everyone but Peabody and Dallas seem to realize that he’s really hung up on Peabody. She just seems irritated by him still. That will change over time.

I keep thinking that this whole In Death series needs a genre of its own. It’s sci-fi because it was written in the late 1990s and takes place in the 2050-60s. It’s thriller or action because it’s packed with both elements. It’s romance because of Eve and Roarke, Mavis and Leonardo, and the rest of the couples that arise in the series over time. It’s mystery because Dallas is a homicide detective and we always get to sit in on her case and its problems. And yet it really seems somewhat like a cozy series to me because we get to be so intimately involved with their lives over time. Even life in the big house seems cozy as Dallas and Roarke attempt to create their own traditions since they have none from their own childhoods. They are all like family, the whole crew. So, I want to classify it as a Sci-fi thriller romance cozy series. Do you think Nora Roberts would have a fit if I did that? As usual, any book in this series comes with my personal recommendation to read it and share it. And read it again, like I am!

This is the review that was due for last Monday, February 12th. Only three more to go!