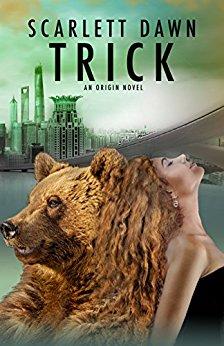 I purchased this at the current price. This is my honest review for which I receive no compensation of any kind.

The cover is the same style of the others in the series. I’m not sure about how the young woman’s hair and the bear’s fur blend or don’t blend. The story is a bit off from what the other stories are. The pace is fast. But the tension suffers from the switches between sex and the weather and ocean stats.

Faith Ann Peyton is a fisherman approaching her 25th birthday and since she doesn’t want to go into the army, she’s entered into the Marriage Match to see if she can win herself a high-priced marriage mate. Ethan Striker is the man in charge of the Marriage Match and he explains its process to her while the bidding goes on. Suddenly, he announces that the Maximum Bid has been met and that bidding is closed. She has a mate. The person who met that Maximum Bid is Alaric Timon Wood of Wood Corp. Mr. Striker takes her to Mr. Wood’s home to deliver her. He drops her off at the end of the driveway and she has to walk up the very, very long driveway to the mansion. Mr. Wood doesn’t answer the door on the first knock. On the second knock, he slams the door in her face. On the third knock, she forces her way in. Faith feels that someone is controlling her. She feels it inside her, controlling her words and actions to provoke Mr. Wood into berserker mode so that he’d recognize his mate. Who would want to force a big brown bear into berserker mode? Whatever, it works. Alaric does go into berserker mode, but he handles it well and no one gets hurt. The bear recognizes his mate. Cass shows up and helps out by explaining things to Faith while Alaric has been knocked out for the night.

The next morning is a much better introduction for the two of them. Faith and Alaric agree to start over and recognize the mating and the Marriage Match. Cass makes pancakes for breakfast and then they all go shopping! The guys need tuxes, but not until Faith and Cass have had fun driving Alaric crazy with some more feminine shopping. Given the size of Alaric, and all the guys, his regular tailor is chosen as the best bet for a fitting, until Cass has a seer moment. Escorting them away quickly from the exploding storefront, Cass and Alaric are killed. Rune comes to the rescue by picking them up and taking them to his house. Another rocky introduction. With both Cass and Alaric dead, Rune doesn’t trust that Faith didn’t kill Alaric until Alaric regenerates. In order to keep Faith safe, Alaric takes her to his house, because until they have sex, she’s not an immortal.

Butch Fitzgerald is the captain of the fishing boat that Faith worked with. He’s concerned for her because she’s confined to Alaric’s house. He’s willing to get her a false identity so she can disappear. But it’s their wedding day and Faith is willing to do things Alaric’s way. Part way down the aisle on her way to Alaric, Faith feels someone take over her body again. She tries to hold it off and manages to hurry the wedding and let Alaric know what’s happened. Unfortunately that doesn’t stop her from turning into a bear and going on a rampage and taking off into the woods to get away from sounds and smells. Cass helps block her from the other’s interference. He also does a spell on Poppy so that she should turn into a lioness to see what it is like. Godrik was a lion and she was mated to him. So she should turn into a lioness. But what comes out of the folds of her dress is a tiny fox vixen. Cass is a fox. How can this be? The magic always gets it right, so now they have to figure it out and learn to live with it. Poppy, mated to the late Godrik is meant for Cass, Godrik’s brother.

From one disaster to another it seems. Poisoning the bride with pizza at her own wedding seems to be another one. But it’s what finally got them to where they needed to be to keep Faith safe. Finally, in their own bed making love.

In an effort to track down who is taking control of Faith, she meets the group’s assassin, Jonathan. She notices that the group looks through him as if he’s not even there, so she treats him as a real person and makes a friend of him. However, the guy takes control of her and makes her punch him. The fear is that as Alaric’s mate now, she could kill him. They need Cass to block the spell.

Then Theron needs help wooing the pizza delivery girl. So it’s off to Dormi’s to question her about the guy that bribed her to poison the wedding pizza. They finally break through her shell and get a few answers, but they really don’t lead anywhere. They do find out that her father beats her and her mother and that’s what she needs money for. So she can get away.

Jonathan and Faith talk about the situation trying to figure out who is manipulating things. They go all the way back to the beginning, Marriage Match and how that all happened. Who was excited about the match? Where the information came from. Then Faith showed Jonathan a picture of Ethan Striker, the man from Marriage Match. All h#ll breaks loose. Cass and Theron are fighting about the last seer. Jonathan is in shock. All the big guys are tiptoeing around and backing off. Poppy is the one to diffuse the situation finally and gets them talking sanely. The whole group spent some time figuring out how the dark seer they used to have had used his twin brother and a transference of his own power to fake his death by Theron. So now Jonathan’s new job is to find Joshua Striker and kill him.

Butch needs help on the boat because his new help is sick. So, Faith goes with him. Suddenly, Butch is flashed overboard and gone and Joshua Striker is before her. They talk and Striker tells her what he wants eventually. He wants her to tell Theron to leave the rock alone because to move it will release a monster they don’t need to deal with. The second thing is that Faith is to go to the pizza shop and rescue the delivery girl as she is in danger. She’s to take her to Rune’s house to live. Then he tells her to use her silver bracelet and she is flying over the rail into the sea. She manages to get off a distress signal. Her bracelet buzzes and it Alaric. She tells him she’s overboard and needs help. She’s immortal. The sea takes her down time and time again. She dies over and over, five days she dies over and over again.

Butch has been found and buried. And now Faith is awake and Alaric is by her side. Cass blocks Striker’s magic. She tells Cass about not moving the lava rock and why. He accepts the message. Then she tells them they need to go rescue the pizza delivery girl because she is in danger and Theron hustles them out of the house. When they get to Dormi’s Pizza there has been a gas explosion and the whole block is a mess. The whole bunch of them start digging in and helping anyone who needs help. Then Faith and Theron find the delivery girl buried in the rubble. Faith talks with her while Theron digs her out. They take her off to the hospital for evaluation.

Life settles down a bit and Alaric and Faith get to be together as a couple.