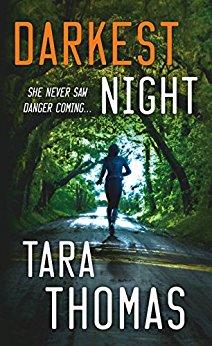 I received an e-ARC from St. Martin’s Press via NetGalley. This is my honest review for which I receive no compensation of any kind.

The cover does give you a sort of “creepy, someone’s following her” feeling, but it’s not the way I pictured any of the scenes. Yes, she went running, but none of her running scenes were described or a big focus in the book, so this really doesn’t feel like the right scene for the cover to me. The story was very good. It went back in time and came forward to the present, but didn’t make a muddle of things. The characters lacked some personality. I felt they were a bit flat, but that could be the switch of genres for this author. I’m sure it’s very different writing romantic thrillers than it is writing erotica. So, I figure it will take a book or two for her to really get her characters human and quirky like real people. The potential is certainly there with a story like this one to build around. The pace was quick with some really fast spots and the tension almost had me chewing my fingernails, a habit I gave up over 40 years ago.

And here the reveal begins…

I’m not going to reveal as much as I have been since I need to get more reviews done. Having migraines means I’m putting too much pressure on myself to get too much done. So I’ll still try to do the Monday through Friday, but shorten my reviews while still giving a good review.

Tilly Brock’s Dad had supposedly embezzled money from Benedict Industries and was caught and fired. Keaton Benedict was told they moved to Texas when they actually stayed right there in Charleston. Tilly’s Mom and Dad are dead now, as are Mr. and Mrs. Benedict. Tilly’s going to college and waitressing at a local gentlemen’s club just until she gets her degree in a couple months. It’s a very unpleasant place to work and made worse by the fact that it seems management and some of the staff don’t like her, in fact, go out of their way to make things tough for her.

Keaton is the youngest of the three Benedict sons now running Benedict Industries. Each of them handles a different aspect of the business. Elise Germain, the little rich girl, has always gotten what she wanted. Her Daddy wants her to straighten herself out and get herself married to Keaton Benedict “or don’t bother coming home”. Everyone gets the message. Elise is supposedly doing an internship at a law firm, but what she’s really doing is blackmail. She has “proof” of a fourth Benedict child, a half-sister to the boys that none of them know about and she plans to use this information as leverage to get Keaton to marry her. Plans like that typically go awry and Elise’s are typical in that regard. She just has to mouth off first to Tilly, who does her darnedest to cause trouble for Elise and let Keaton know what’s going on. People end up getting shot and other people’s plans fall through the cracks as well. Tilly has had a narrow escape from both the gentlemen’s club and Elise’s clutches, and safe in Keaton’s arms.