A Marchioness Below Stairs 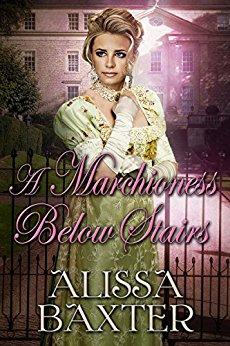 I was provided a copy of this book by the author. This is my honest review for which I receive no compensation of any kind.

The cover is lovely and really suits the story. The story is quite entertaining with this young woman who has finally achieved freedom. The characters are quite well-done and appealing. The pace stumbles a bit and makes one wonder if you should sit back and watch the scenery or get up and order people about. The tension seems to survive this, though and keep you going to the end with events and some small surprises.

And here the reveal begins…

Isabel was in love with the man she was going to marry. Then her father made her write a horrible note and change her plans. She would marry an older man who had the money to pay the family debts and make life easy for her father. She did her duty and married the man her father insisted she marry and she waited. In time her husband grew older, and sick, and died. And she was free to live her life her way. Her father was also dead. Isabel and her mother are finally coming out of mourning and about to re-enter the social whirl, when Isabel runs into Lord Julian Fenmore, the man she loved and had intended to marry. The man who received her terrible note. She spoke with him and explained what had happened and what circumstances were now and she thought she saw some hope in that direction. However, the next morning, Lord Julian had announced his engagement to Miss Hamilton.

Isabel’s mother, Jane, and Cousin George get Isabel involved in some quiet social events. Isabel meets Cousin George’s business partner, Marcus Bateman. The man that Cousin George credits with most of his success in America and building his fortune. A man he holds in very high esteem. A man who left London under a cloud of a scandal back then. Isabel, Lady Axbridge is planning on enjoying her freedom while in London, but her mother seems to think she should be looking for a new husband.

Cousin George gives a house party and invites a strange mix of people, especially given his anti-slavery leanings and intent to involve himself politically in those leanings. The Wetherbys are a family who not only still supports slavery, but still, own slaves on their plantations. Cousin Marla is down with influenza, so she can’t stand as the hostess, so Isabel and her mother, Jane, are pretty much left to do the entertaining since George is having trouble being polite to the Wetherbys. Marcus Bateman shows up for the party as well. And a snowstorm brings Lord Fenmore and some family to the door, including his sweet new fiance, Miss Hamilton. Then the chef gets influenza and things get tricky. Who’s going to cook for this house full of people? Well, Isabel actually has some experience in her own kitchen, so she offers to help out. Marcus starts popping in and out of the kitchen and helping with meals as well. It seems he had worked in a restaurant years ago to earn his way. With both of them trading off times and working with the couple of cooking maids who are still healthy, everyone gets fed and no one suspects just how high tone the meal is. The informality of the kitchen allows the two ton chefs to get to know each other in a way they wouldn’t have under other circumstances. They develop a closeness, but Isabel wants freedom, while Marcus wants her. He’s proposed and been turned down, so if she wants him now she’ll have to make things quite clear to him.

And that’s only half the book. The other half is how Isabel works on her anti-slavery pamphlets to help George in Parliament. A wedding. What’s Marcus been doing? Where are Wetherby’s lost papers? Is it safe for a lady to go to the Frost Faire? What do children in the park have to do with all this? All things to look forward to in the reading of this book.