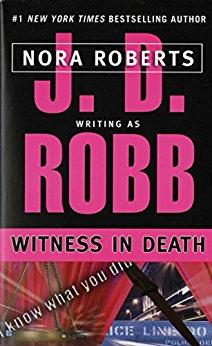 This was purchased as part of a bundle on BN.com for my nook app. This is my honest review for which I receive no compensation of any kind.

I don’t like the cover of this book other than the use of the vivid fuschia color. I see the note reference and the knife, which is hard to spot if you don’t know what it is supposed to be. But it really isn’t attractive as far as I’m concerned. The storyline is an old and reliable one of the theater and old festering wounds. The characters are very well done here. That’s something that Robb/Roberts excels at, I think. She doesn’t have to write a lot to give you a total look at a character. It’s like an artist who can draw just a few lines on paper and you see the whole person. The pace isn’t quite as fast in this one as it is in some of the others in this series, but the tension is just as high. You keep looking over your shoulder and listening for footsteps in this one.

This reasonable moderator, and equal piece of justice, Death.”

I’ve started paying closer attention to the quotes at the beginning of each of these books. I find them to be quite appropriate and interesting. There are usually two of them. The second one for this book was this…

Roarke takes Eve to the theater and right there on stage, in front of NYC’s finest homicide detective, murder is committed. It was in the script, but someone took things a bit too far. What was supposed to be a harmless stage prop was actually a lethal weapon. A retracting knife replaced with a kitchen knife of similar appearance and wielded with lethal intent. Dealing with actors, how do you tell if their statements are real or acting?

When one of them makes a break for it and Dallas has to deal with an ambitious Captain and her people of the NY Transit Authority at Grand Central, Officer Trueheart gets hurt. Dallas, with her usual manner of command, has told Captain Stuart to keep her people back and put their weapons on stun only. Captain Stuart doesn’t like the intrusion into her territory and her people aren’t as well trained as Dallas’ team. Trueheart takes the shot for Dallas and ends up falling down onto the tracks. His life is holding by a thread, which is held in Dallas’ hands as she applies pressure to his wounds until the MTs get there. Later, Trueheart’s mother thanks her for saving her son. Dallas, in her usual awkward way, denies any such thing. Such an uncomfortable heroine.

After much poking and prodding and work on backgrounds, Dallas figures out who the murder was and why. She brings everyone together and reveals it all, and once again she is baffled by people’s reactions to things. Will she never understand people and how they relate?

On the couple front, Eve is moved to serve Roarke a romantic dinner. He usually does things for her, and she feels she should do something for him. Summerset offers to help with the table and flowers, but she won’t let him help with this. She manages to get things put together after about four hours of effort, including herself in a startling red dress. When Roarke walks in, he is caught off-guard and isn’t sure how to respond. Dallas catches his reaction, feels awkward, and gets angry and they end up in a fight that Roarke has to figure out how to resolve. How to recover from his faux pas. Once again, it ends up being a romantic and sexual tangle between the two strong people that only strengthens their bond. And causes more readers to fall in love with this couple.