I’ve been reading this series and filling in the one I missed initially, then the ones that are new. This is a series that is so much fun to marathon read, that I just have to share them as a group!

I caught up on #3 Wicked Little Secret, which came out in October of 2016. In this one, the ghosts get nasty. One takes over Mandy, which she decides she doesn’t like at all! Another one attacks her with a bookcase, and Rick gets banged up saving her. The sleuthing duo solves the case by using their heads and find the stolen art not far from the starting point. Rick steals kisses throughout! They are such a cute couple and she still isn’t used to it.

Released in December of 2017, #11 Wicked in Wonderland: Strawberry Eclair Murder was a pretty good mystery as well as a good story, but I felt it fell apart a bit at the end. An artist of fairly set habits is stabbed in the back on her way home. Certain things are missing and certain things  aren’t right about the circumstances of the body, but there

are no ghosts involved. Mandy and Rick have to work this case because Kathy is very upset about this death. So, who is Kathy? Well, her father is Hernandez, the head of the FBI’s NYC office where Rick and Mandy used to work. And her mother is the Chief at NYPD. When these two call in favors, it’s impossible to say no. At least it’s good eating. 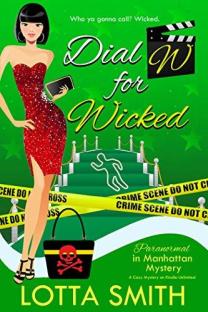 #12 Dial W for Wicked was released recently in February of 2018. It is a wonderful addition to this series. It’s a new approach by the ghosts this time. Mandy is hearing them calling to her for help! And they are little girls who’ve been missing for a long time. Mandy and Rick need a lot of help from Jackie in this case, but they crack it. Mandy has a super dramatic moment in here when she takes a white handkerchief and wipes blood off a glass wall. Then uses it later to get a confession. What a scene! The ending is news readers have been waiting for, but I won’t reveal it. Read the book and see. This is definitely a 5 star story!

Just released on April 10, 2018, #13 Wicked Egg to Crack, is my current read and is already shaping up to be a worthy addition to the series. Mandy’s supposed to be taking it easy, but the company needs her help on a case of a Faberge egg! I can already recommend it!