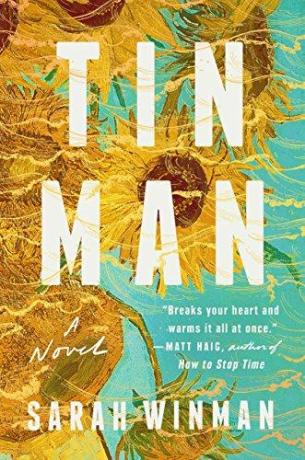 I’m sure you recognize the image above as Vincent van Gogh’s Sunflowers or a close rendition of it. This story starts out with Dora and Len Judd going to a neighborhood evening at the pub and Dora wins a raffle where she has the opportunity to choose a prize. Len wants her to choose the whiskey, but she is strangely drawn to the painting of the flowers and makes her choice. Once home, her choice wins her another prize, a fight, and some bruises. The painting continues to cause trouble in the house. Dora and Len have a son, Ellis. Ellis has a talent for art which his mother encourages. She also encourages him to stay in school. Eventually, she can’t take the bullying anymore and leaves, encouraging Ellis to stay in school and continue his art. Len forces Ellis to work at the car company working with metal.

People come and go in Ellis’ life but few are important. There’s Mabel who runs the shop and who takes him in. There’s Michael who he lives with at Mabel’s in their own little world. Michael has a talent for writing and loves Ellis. He shows Michael what love between two young men can be, innocent, naive, forbidden. But the two only have a short time together because there’s Annie. The third one of the trio of friends who in her innocence also loves Ellis. Annie who will destroy that little world of theirs by marrying Ellis leaving Michael out in the cold.

Michael finds the world cold indeed. He finds contentment for a time with another young man and then he goes off to France to be the maid in a hotel at the edge of a large field of sunflowers. Here he finds some semblance of peace before returning to England. He reduces his life, physically and emotionally, to only what is necessary before returning to face Annie and Ellis just before his death. Very moving. This journey from love to death and understanding.

This was not my usual type of book. I don’t like sad books. It was almost like a memoir of these sad lives rather than a story. And the back and forth of the time with the memories parts made it difficult at times to tell when you were actually moving forward in the story. It had a lazy sort of pace to it, except for the part while Michael’s friend was in palliative care and when he was in France. Those times had much more of a sense of tension about them with things actually happening and keeping you alert about what would come next.

It’s a love story, but the lovers were actually together for such a short time that it’s sad and poignant. I read this book through twice because after the first time I really didn’t feel I was ready to write a review. I had to let it set in my mind for a bit. Even after the second reading and having notes on it, I don’t feel that I have a real handle on this one. It sort of floats around in the mists on me. I recommend this for readers who enjoy crying over their characters and who are not offended by same-sex love affairs. And it was love. It was love before it was sex, and long afterward, too. I will probably have to read this one again and maybe again. Who knows, maybe I will never have a real good hold on this one, but I will say I enjoyed major parts of it even while I am still lost in the mists of the other parts.

I love sunflowers, too.