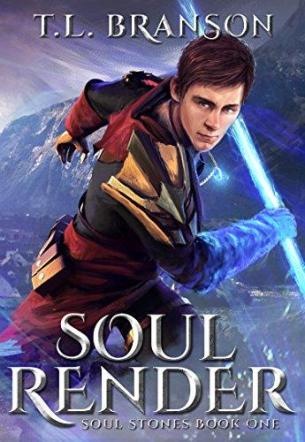 The cover is striking, but not my style of artwork. I prefer art that is more flowing and mysterious for fantasy. This has the image of the main character, but he looks almost like he is in a suit for a sci-fi film.

Soul Render is complex and twisty enough to be entertaining and engaging. I’m quite looking forward to reading the next book. (At this writing, I already have read book 2, and it’s great!)

The characters are very well done and I was even able to keep track of whose body Will was in at any given time. The author is very good at bringing a character to life and fleshing them out in very few words.

The pace was brisk and appropriate for the story while the tension was high, reaching its peak when Lotess calls for the letters to go out against the traitor queen.

Will is the main character and one of three brothers set on getting justice. He was an excellent character. He never completely gave up, even when he saw his brothers executed and supposedly at his fault. He was plucky. He got up and got going again, facing each challenge with renewed courage and hope.

Maya is the now-dead king’s daughter. She was sneaky and secretive initially with Will about wanting the Soul Shader so she could save her father and about being with and in charge of the Revenant. But her mother had been watching her from the stone where her soul had been stashed and she was proud of her daughter.

So why did Lotess call her the traitor queen? Was she referring to Maya or her mother? Who will be queen now that the king is “dead” and the queen mother is back but in another body? Will it be the queen mother or the queen daughter? What body will Will stay in? Will he retain the power of the stone? Read Soul Shade for answers to these questions and more excitement in the Soul Stones series!

Highly recommended for YA Fantasy readers.