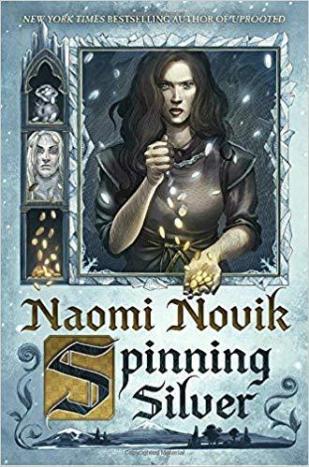 The cover is quite fascinating. I had to keep looking at it while I was reading the book to see if this or that was actually shown on the cover. There is a lot on there. Lots of frost crystals that almost look like the outline of a city skyline in one place, lots of falling silver coins that pass through the young woman’s hands and turn to gold coins, a sack of silver coins that I imagine represent the Staryk King’s treasure that he wanted to be changed to gold, and the image of the Staryk King. The illustration at the bottom is pretty good for a glass mountain.

The story itself is part original fantasy story and part old fairy tales rehashed and given a new look. I’m sure we’re all familiar with the Brothers Grimm and their poor overworked maidens. Turning silver or anything else into gold is nothing new. BUT, the way Ms. Novik uses the gold and the bargaining over its transformation is new. Here we have three major women; Miryem, a young Jewess daughter of a moneylender; Irina, a duke’s daughter with a touch of Staryk blood in her; and Wanda, a poor girl who’s the daughter of a drunken bully who owes Miryem’s father money.

The characters are all just normal people who get caught up in extraordinary times and can either give up or rise to the occasion. Well, half of the characters are ordinary. The other half are either Staryks or a demon. Staryks are winter people, and they are a fierce race. The demon is a hot demon and hates the Staryk people. While the humans are just afraid of them both.

The pace is pretty good throughout. There are times when things are happening fast and you just have to keep up. Then there are times when you’re just wandering along in someone’s thoughts and it seems a bit slow, but that doesn’t last too long and it does give you an in-depth feel for the character as well as setting up what happens later on. The tension throughout the story is excellent and I hated to put the book down to go to bed when I was on page 399 of 466. So the next morning I was at it with my breakfast and read until I was finished. Then I immediately started my review, which is not my usual way of doing things. Typically, I write an outline and let it sit for several days, then turn it into a full review. This one wouldn’t wait. A great fantasy novel in almost 500 pages, a standalone, with a happy ending…WOW! I had to share it right away. It’s not Young Adult, but it’s not beyond the reading abilities of that age range if they’re good comprehensive readers. You have to be able to keep the changing point of view, sometimes within a chapter, straight so that you know who’s who and what’s going on. The author uses mostly those three women I spoke of to tell the story. But there is nothing to tell you who it is when the point of view changes. One reviewer whose review I read said something about icons; but in the library version that I read, I saw no sign of icons for each speaker. Once I got into the book a little way, I had no trouble telling who was speaking. I have every intention of finding the author’s other standalone, Uprooted, to read soon. And I think I’ll give her Tremeraire series a try as well.