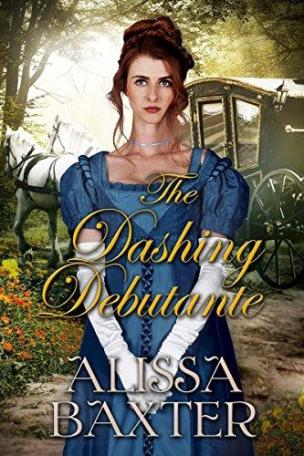 The cover is suitable for the formulaic historical romance inside. And the story is indeed formulaic. The gorgeous, bluestocking, diamond-of-the-first-water debutante (Alexandra) catches the handsome, self-proclaimed bachelor Duke (Robert, Duke of Stanford) by just being herself, of course. She gets along very well with his “on the wrong course to love” sister and saves her. She takes risks and he saves her multiple times, including with a sword duel.

Our characters are Alexandra Grantham, our gorgeous bluestocking deb who really wants nothing to do with marriage and Robert Beaumont, Earl of Chanderly and Duke of Stanford. Considered the leader of the ton and arbiter of all that’s done and not done in society. Lady Beauchamp is Alexandra’s grandmama. She’s very well thought of in high circles and is a close friend of Robert’s. She’s bringing Alexandra out this season, whether she wants to or not.

There’s Sir Jason Morecombe, a vile man who tries to poison everything for his personal amusement. And Lady Barrington, who just won’t give up on pursuing Robert and sees absolutely nothing in her way. Mrs. Hadley is a gossipmonger. Her sister is Sir Jason’s SIL. Mrs. Hadley has a daughter named Jane (plain Jane) who also wants Robert. She also has a step-daughter, Emily, whom she shuns. She’s a close friend of Alexandra’s.

Alexandra has a brother, John. He suffers from severe asthma but tries to ignore it. John finds himself in love with Emily and unwilling to leave the city for his health. Mr. Edward Ponsonby wants to marry Alexandra, but he wants her beauty and her fortune, not her intellect. He has no understanding of her at all. He kidnaps her and she has to be rescued by Robert. This is where the sword fight comes in. Morecombe threatens to spread the gossip about the abduction and Robert challenges him to a duel.

The pace is brisk and totally appropriate to the story about this slightly madcap young woman. Tension builds around the couple from the very first when she holds up his carriage a la Robin Hood in her quest to help the local poor.

I must give this a 4-star rating as it is so formulaic and predictable that things are foreseeable in the story. There are no real surprises. But it is a good story and worth reading just for the fun of the relationship between these two.