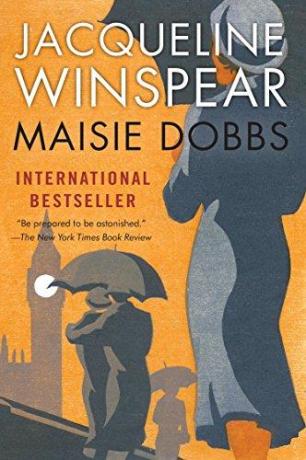 The cover art is unappealing to me. I know it’s meant to evoke the period, but for me, it is just rather dreary and boring. Not even having an orange background saves it.

The story, however, is anything but boring or dreary. Even the dreary parts aren’t dreary. Maisie starts in lower class surroundings and by her own smarts and some fantastic luck, raises herself to what might be considered upper middle class. She’s rubbing elbows with the upper class, but she’s definitely not one of them. She’s their experiment. She does her duty as almost everyone else did who was able. Her’s was as a nurse in France, where she was reunited with a young, handsome doctor she’d met “one enchanted evening in a borrowed blue silk dress”. She saw and experienced the true horrors of war and lived to tell about it somehow. Now, years after the war is over and she’s working in her own psychology and detecting business, Maisie takes on a case that brings all the unresolved endings straggling to the surface and Maisie must solve the case for her client and then solve her own “case”. The surprise ending leaves you wondering how it might play out in later books. Other than that, this book is complete in itself. No loose ends.

I had heard that Miss Barrington, the narrator, had died and was replaced. Apparently, they were quite pleased with the new narrator in spite of how devastated they were over the loss of Miss Barrington, who was apparently a long-time friend as well as an excellent narrator. I must second this opinion of excellence. Miss Barrington handles the accents and male and female voices very well. There is never any confusion as to who is who in any conversation or starting up a new chapter. Her voice is well modulated and so easy to understand that I never had a question about what was said. I thoroughly enjoyed the experience of Audible. This was my first and I won’t let it be my last. Though I think I mentioned that I can’t drive while listening. Just don’t have that type of concentration. But I’ll get a lot of knitting done this way! Highly recommend this book, probably the series if the rest is anywhere near as good as this first one.