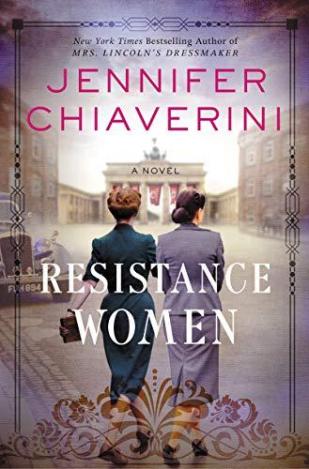 Purchased at the current price

The cover is well-done with the two women dressed appropriately for the time walking in a rather bleak city area towards an arch decorated with banners with swastikas. It gives you a feel for what is inside if you look at it for a second. The buildings on each side and the storm clouds above funnel everything towards the dominant building at the center with the banners, the authority of the Third Reich and Adolph Hitler.

The story is heartbreaking and unfortunately based on real-life experiences of women who actually lived during that time. I was quickly swept up in the lives of each of these characters, even the ones I wasn’t particularly fond of. I went through the 600 pages in just two days, so intense was my focus with this book. Mildred, Greta, Martha, Sara and the men in their lives were fighting for a better life for a country and for the Jews. It seemed that each time they reached out to someone, the connection fell apart somehow and more people died because of it, or countries got invaded without receiving their warning. In the final chapters, when their resistance cell was gathered up by the Nazis and they were all sent off to prisons or executed on the spot, it was painful to read about the hope and hopelessness that was their constant companions. How much they suffered mentally and physically through their imprisonment with the constant questioning and torture of both men and women, and never knowing if their loved ones were still alive or not. For one woman, it was two months before she found out that her husband had been executed. The minister who had been with him at the end told her when he came to her just before her execution. So much pain in such information. The men were hung and the women were sent to the guillotine. Hanging was considered more humiliating, so they hung all the men. Women were considered second class citizens and not worth the time and effort of a hanging. The guillotine was more efficient.

To know that the efforts of these women have gone mostly unrecognized is sad. They did just as much, if not more, in their way than a lot of the men. They risked their lives in so many ways, big and small, to bring down the Reich, and yet history really doesn’t remember them well. The courier work, the stickers and posters, the rumors, the meetings, and hiding people. All the while, they carried on raising their families and trying to eke out enough food with food stamps in an economy that had so many people almost starving. Shame on history for forgetting these brave women and their men.

The pace of the book was fairly brisk most of the time. Seldom was there time for leisure in the lives of these people. The only place time dragged was in prison and even then the tension of the unknown and constant unexpected kept the story moving. I can truly say this is a 5-star book and I highly recommend it to any fan of WWII stories or stories about strong women. This is surely a book I will read again.