I should keep y’all updated on what’s new on my “shelves” and what I’ve borrowed, too. Yes, I actually went to the library. It’s not that I don’t like the library, but I really like to own my books after I read them. I kept seeing reviews on The Children of the Whales and was so curious about them (14 volumes) that I put volume one on hold at the library. Now, graphic novels aren’t typically my thing, but people have been really impressed with this series. They keep saying it’s different and the artwork is superior. So I wanted to check it out without buying it. It took me about 45 minutes to get through it and spend time looking at the artwork. I only turned the page the wrong way once. The cover art is in color and inside is all black and white. Too bad there aren’t some color pages inside, too. The cover art is magnificent. But the B&W art is wonderful, too, so detailed. The story so far is already quite involved at only 180 pages or so. I’m quite ready to return to the library to get more volumes of it. However, I already have more than enough books to keep me busy for awhile along with the other things I’ve taken on.

Let me bring you up-to-date on some things. My mother is 93 years-old and needs to be moved to a memory unit, senior housing for those with memory issues. My sister and I are the ones who have to find and approve this whole situation. The complication is that my mother does not want to move.

As for my health, I’m having fibromyalgia flares and some issues with depression and old injuries that are now aging and developing other problems. In spite of taking 3 daily medications, 1 monthly injection, and 1 quarterly set of injections for migraines, I had a week-long migraine last week. I now have a new pill that’s “take it at the first sign of pain” type med. I couldn’t read for any period of time while I had the migraine. All I could do was play spider solitaire on my tablet. I improved my time, but my number of moves is still over 100. I’m no good at strategy, especially against the computer! And try thinking with a migraine!

What I borrowed from my local library:

Children of the Whales, Volume 1, by Abi Umeda – graphic novel about a dystopian culture adrift on a sea of sand.

Bringing Down the Duke by Evie Dunmore – A League of Extraordinary Women Novel. He’s described as the kingdom’s greatest strategist, cold and calculating. She’s an educated suffragette, brilliant, but destitute. Sounds good to me!

NEW! The words I never wrote by Jane Thynne – a past and present tale. Secrets buried in Europe in 1936 will be revealed when a celebrated journalist discovers an unfinished manuscript in an old typewriter case and is determined to finish the story. Sounds chilling, but good.

Coffeehouse Knits, Knitting Patterns and Essays with Robust Flavor by Kerry Bogert – I almost bought this book on Amazon the other day, but I had already exhausted my budget at that point. But when I saw it on the new books shelf at the library, I didn’t hesitate.

NEW! The Oysterville Sewing Circle by Susan Wiggs – Susan Wiggs is a favorite author of mine ever since I read her The Charm School. So I immediately entered this giveaway when I saw it on GR. I never win anything. So, I immediately forgot about it, too. Surprise, surprise. The email said I had actually won it and it would be shipped as soon as it was released! The story is about a young woman who returns to her hometown to discover the secrets there as an adult. Triggers.

Hairless Harassment by Molly Fitz is a cat cozy I picked up off Book Bub.

Teased by Fire by Molly O’Hare is another Book Bub acquisition. RomCom

AmiguruMe by Allison Hoffman – how to make crocheted figures that actually look like particular people. Sounds fun to me!

Knitting Yarns by Ann Hood is an Amazon acquisition, a collection of essays on knitting.

Knitting Pattern Essentials by Sally Melville – how to adapt knitting patterns to fit and look the way you want them to. 226 pages on Amazon for $1.99 (Kindle)

Knit One, Kill Two by Maggie Sefton – a knitting cozy from Amazon, read years ago, but it’s time to do it again and try the series 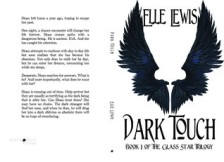 Then I got an email from a publisher and…

The Disharmony of Silence by Linda Rosen – via NetGalley, another one where the secrets of the past are revealed and must be dealt with in the present.

Genesis Rising Book 2 (not yet published) of the Glass Star Trilogy by Elle Lewis – publisher via NetGalley – well, I needed to read book one first didn’t I? So KU had it and I got Dark Touch Book 1 by Elle Lewis – fantasy, YA, I think.

This should keep me busy for some time, don’t you think? No promises on any of it for time slots, thank heavens except for Genesis Rising. So I guess I’ll get started on Dark Touch.

Let me know if you’ve read any of these and what you thought of them. It may help me decide what order to read them in.

3 thoughts on “Just some thoughts…”