The Words I Never Wrote 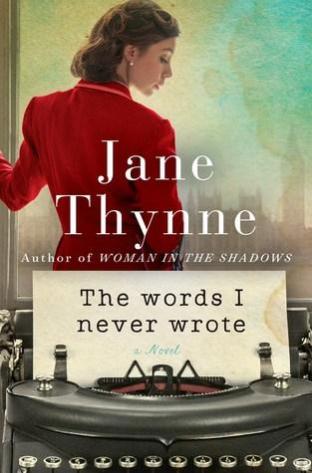 The cover is interesting with the misty background of a city then the woman in a tailored suit looking pensive. In front of that is the old typewriter with the title typed on the paper and there is an overlay of old water-stained paper. You know you’re going to be looking into the past. I had seen this book written up on one of my feeds several days before I was at the library and it rang a bell in my head. Still intriguing. Yes!

And the decision paid off. I left this for the last book to read out of my library stash for what reason, I really don’t know. But what a great book.

The two sisters in the book are situated on different sides of WWII because one is still at home in England and the other has married a German industrialist and moved to Berlin. Irene had fallen in love with Ernst and hadn’t given a thought to what it would mean in a more worldly sense. The sisters weren’t able to keep up their correspondence for very long because Irene couldn’t write what she really thought and what she was really doing after awhile. She knew her mail was being read and she was being followed. Cordelia thought her sister was becoming a good little Nazi wife since she was socializing on the highest level of society and military and government. She couldn’t write about the other side of her life, the part that was taking place in the shadows. The part she did because it’s what her sister would expect her to do.

Cordelia goes about her life. Mourning the man she had met and loved when she was living in Paris for several years who had been killed by the Germans. Another strike against her sister. The sisters don’t speak or see each other until the British and their allies are in control of Berlin and debriefing the citizens. Irene is still there, and Cordelia is among the debriefers. Finally, they get to share their stories and secrets.

Juno is a correspondent who bought an old typewriter with a case. In that case was a partial manuscript for a novel, Cordelia’s novel. She’s curious enough to want to know what is missing, so she travels to Berlin to pick up where the manuscript stops in mid-sentence to find out what secrets are left.

Jane Thynne has crafted heartbreaking scenes and heart-touching scenes as she created this sometimes brutal, sometimes lovely story. You got to know characters on both sides of the battle and you liked and hated them on both sides. Why should we consider Jews good just because they were Jews when they made money by turning in other Jews to the Nazis, but a Nazi officer was bad even though he looked the other way when a woman was hiding a Jew in her house rather than report him as was his job? Jews weren’t all good, and Germans weren’t all bad. They were all people caught up in a horrible situation that most of them had no control over. Some of them made good decisions and some made bad decisions. Some lived and some died. Ms. Thynne brings all this to vivid life. She is an author I would like to read more of. Highly recommended.

One thought on “The Words I Never Wrote”