Scot Under the Covers 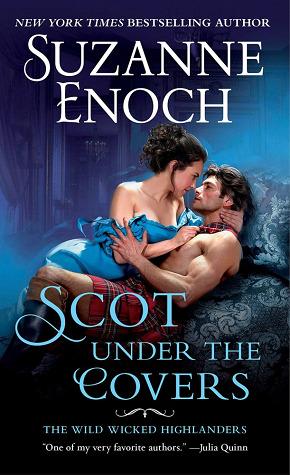 The story inside is well worth the reputation, though. Ms. Enoch has such a way with the historical romance novel that you could probably sell it with just her name on it and a blank cover. This is the second book in this “wild, wicked highlanders series”. Though with the amount of backstory provided and the character development done in this book, it could be a stand-alone. The three brothers have been summoned to London for their little sister’s wedding. They are supposed to find brides before she gets married or their mother pulls out all financial support for their beloved highland home and father. One brother is already married, but these two are still in need of brides. Aden is the deep, mysterious brother and he’s known as a gambler. Miranda’s family has a past scandal with gambling, so she has no use for gamblers and she makes her opinion of gamblers quite clear to Aden at their first meeting.

Miranda’s brother is the young man marrying Aden’s little sister, Eloise. Matthew has a weakness for gambling and has recently come under the sway of an experienced gambler who’s gotten Matthew in way over his head and now wants Miranda as payment for Matthew’s gambling debt. And Matthew has agreed! The man is not only a card sharp but an odious person. And while Miranda may detest gambling and gamblers, she’s smart enough to know that only a gambler can help her out of this mess. She turns to Aden for advice and she gets more than just words. She’s not just prickly this time. It’s total attraction that sizzles between the two of them. But Aden won’t ask for any sort of commitment from her while she’s tied up in this commitment to another man. Only once she’s free will he consider asking for what he wants. Miranda understands how the game has to play out but finds it difficult waiting for each turn of the card.

Recommended. Now I have to read the others in the series and I suggest you do too.