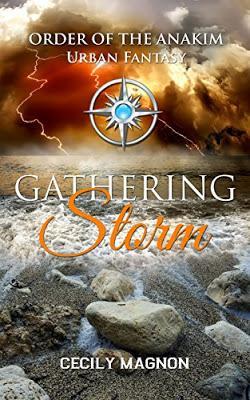 Sarah, Elysa’s mother, has disappeared. Elysa is slowly learning the secrets Sarah kept to protect her. She connects with the Guardians and Jarron becomes her trainer. And more.

Elysa must figure out all the secrets about herself now as spirit guides are teaching her new skills and there are demons coming at them fast and furious.

Can Elysa make the decision that will kill a part of herself?

The cover is attractive, but not terribly inviting. It’s very harsh and doesn’t relate to the story at all. All of the books have that symbol, but I don’t see any relation to the books.

The storyline is really good. The author has created a wonderful story, almost a coming-of-age tale, of a young woman who must now do it on her own against incredible odds.

The characters were not introduced to us in this book very well. The only character we really had much background on was Elysa, Ellie. I would have like a whole lot more on Jarron, the High Guardian and her trainer and lover. Also, I think we could have used more information on Anya the Oracle, Sirius the computer geek, Caleb and Gina, Isabel, Maya, and Markus. They were all part of the Guardian organization. They were the people she was working with and we really didn’t know them very well. I would have to figure they will be better introduced as needed in future books OR that some of them were introduced in the prequel. Though, probably not. I’m going on the assumption that the prequel is about Elysa’s life before her mother disappeared and then right afterward.

The pace is almost flat out. There were some areas I reread just to make sure that I wasn’t missing anything because things happened so fast at times. These folks didn’t get a break. Well, yes, they did get a break to take a shower in Jarron’s bathroom. His shower has 5 shower heads and 2 columns of listings for shower settings. The author didn’t actually say, but it is big enough for two. Use your imagination.

The tension was one tightly pulled string from start to finish with an occasional extra pull just to be sure you were still up on those toes.

There is a really great story here. Ellie is looking for her mother, who has disappeared and is looking for more information on herself as well. The Guardians are helping her learn more about herself, but they really want to use her. Her spirit guardians are trying to make sure that she gets what she needs out of this all before she gets hurt so that she can do what she needs to do for them.

There was so much more I wanted from this book! Especially now that I’m looking back and trying to write this review from my notes. I see more and more what I want to know. Not knowing if any of it was in the Prelude or will be in Dark Skies, I can only say I want it and it wasn’t in Gathering Storm.

I want to know more about Ellie’s family before the disappearance, which has to be in Prelude so I won’t belabor that too much. Her grandparents are fascinating. I would really like to hear their story. And her father? Where has he gone?

Of the Guardian group, Isabel is in charge so I think knowing more about her would be nice. Josh, Caleb, and Gina seem to be more than wallflowers. Knowing a little about them might be helpful, too. Sirius is the computer geek. That’s the extent of his dossier. A bit slim, I think. But Anya the Oracle is fun, she has a sense of humor and is very open with Ellie. She is a major character in the organization and in the book in a way. She really needs a background story, but we know nothing about her. Most of these people we don’t even know what they look like from head to toe. Or any idiosyncracies about them to distinguish them.

And then we really could use some more personal information about the man who is both trainer and lover. Jarron is only a two-dimensional character really. Yes, he’s pretty three dimensional as he makes love to her. But we don’t really have much of a background on him. The man with the luxurious bathroom in his cabin and we don’t know much about him. Hmmm.

And I just have to say something about the most horrifying, gripping scene in the book. I felt so badly for Ellie. Nothing could make me feel better. Nothing could compensate me for having to do that. I think I would probably turn the gun on myself next if I ever had to make a decision like she did. Even with her mother’s voice begging her to do it. The writing quality of that scene was superb. It held me there feeling as if I were watching it in real life. I had tears running down my face and I was so involved with what was happening I couldn’t even reach for a tissue to dry them.