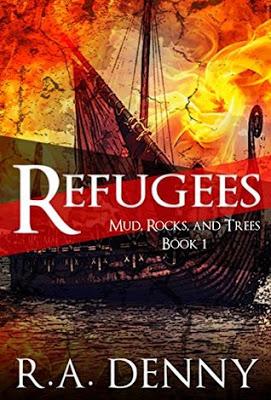 “An epic journey of a lifetime.” That’s what three young individuals from three different corners of the world have dreamed about. They were destined for greatness since the moment they were born. But what if they don’t want it? What if they’re not ready? What if their desires no longer align with the prophecy?

The problem is, they have no choice. The star has appeared. Their destiny has already begun to unfold.

It’s not the send-off that they’ve been dreaming of. Forced out. Banished. Raided. This wasn’t how it was supposed to be. Now they must discover who they really are while embarking on the most exciting journey of their lives. One star. One impossible task. One chance to save the world they love.

R.A. Denny is an ancient history buff with a law degree from Duke University. While working as a criminal prosecutor by day, she escaped by night to create the fantasy world of her Mud, Rocks, and Trees series.

R.A. Denny loves adventure, animals, and history. She has traveled to the ancient rock city of Petra on horseback, flown through the jungles of Costa Rica on zip lines and visited the Great Pyramid on a camel. She lives in Delaware. As a child, she had two pet flying squirrels.

This is a debut novel. I was very impressed with the author’s ability to create a setting that I could see so clearly in my mind’s eye. Ms. Denny’s ability to make you see what is going on is quite amazing. She has created a world that is a piece of art. Each area where the different cultures live is as different as the characters that live there. The cultures do not appear to mingle except in the cities.

Ms. Denny has created some rather charming characters to act on her stage. Each character has different animal-like features, such as scaly armor like an armadillo or “wings” like a flying squirrel. They are young and are called by destiny, by a star suddenly appearing in the sky. None of them knows why they are called, but they all respond. For each of their cultures, their response ends in violence, bloodshed, and death.

While this all sounds wondrous and exciting, it really came across as rather plodding. The pace seemed to be fast, and yet no progress seemed to be made for all the effort. At 60%, I gave up the effort. I read several reviews of this book and found that some other readers had found the book wonderful and still others had had similar problems to my own.

Never judge a book by its cover. I’m sure you’ve heard that before. However, many readers do just that. That’s why authors work so hard to get really eye-catching artwork for their covers. I really wasn’t enamored of the cover. It related to the story, but it wasn’t appealing. In fact, I kept putting off starting the book because of the cover until I had to set a start date to make me pick it up. Perhaps, I should have trusted my instincts about the cover and decided this book was not for me. This book currently has a 4.33 rating on GoodReads and a similar one on Amazon, so somebody likes it well enough to give it good ratings. This may be one of those books that simply needs to find the correct audience. Perhaps, if you read it and really like it you’ll drop me a note and tell me the secret you found in the book that made you like it so much. Perhaps, I will be tempted to attempt it again.